What causes cramps, no period and white discharge?

If you’ve missed a period, have cramping and a white discharge from your vagina, you may be pregnant, although there are other causes for these symptoms.

Cramping without a period could also be a sign of irregular periods, endometriosis or uterine fibroids.

White vaginal discharge, cramping and a missed period are all signs of pregnancy, although they can also be symptoms of a late period or other conditions.

Stomach pain and cramping during pregnancy usually feel different to pain and cramps you experience during your period. This is because pregnancy cramping and stomach pain is caused by ligaments in your lower tummy stretching in preparation for your womb growing in size. You may experience discomfort or pain when this happens, particularly on one side of your lower tummy.

Additional signs of pregnancy include back pain, a blocked nose (nasal congestion) as well as:

In some cases, early pregnancy may feel as if your period is about to start.

Other causes of cramping with no period

This occurs when bacteria infects your womb. The infection can spread to your ovaries and fallopian tubes, and usually enters your body as a sexually transmitted infection (STI) via your vagina. You can develop PID more than once.

When caught early, PID can be successfully treated with a course of antibiotics. However, if PID is not caught early it can damage your reproductive system, causing infertility, scar tissue formation around your fallopian tubes and chronic (long-term) pelvic pain.

Endometriosis occurs where tissue similar to the lining of your womb (endometrium) starts to grow elsewhere and attaches to other organs, such as your ovaries and fallopian tubes.

Getting a diagnosis of endometriosis involves talking to your doctor about symptoms, having a pelvic exam and imaging tests. In some cases, you may also need surgery to confirm a diagnosis.

Endometriosis symptoms can be relieved with treatment but there is currently no cure. Treatments include hormone therapies (oral contraceptive pill and progestogens), which can reduce bleeding and pain, and in severe cases, surgery.

IBS is a common digestive condition that affects more women than men. Common IBS symptoms include:

Other IBS symptoms include heavy and/or painful periods, pain during sex and urinating frequently. IBS symptoms can worsen during your period.

Cervical cancer is cancer that starts in the entrance of your womb (cervix). It is most common in women aged 30–45 who are sexually active.

In the early stages, cervical cancer has no symptoms. Later, symptoms include:

Uterine fibroids and polyps are both noncancerous growths in or on your womb. They can cause heavy and/or painful periods, as well as irregular periods.

Fibroids and polyps can be small or large and vary in number. Large fibroids can sometimes be detected during a physical examination by your doctor. Symptoms of fibroids include:

Perimenopause is the period of time before menopause when oestrogen levels in a woman start to decrease. Common symptoms include irregular periods, hot flushes and night sweats.

PCOS is a hormonal condition that affects the normal function of your ovaries and their ability to release eggs regularly. Symptoms include: 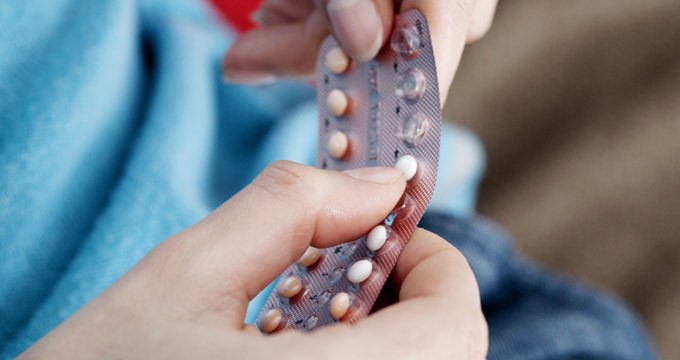 Stress or other lifestyle factors

Changes in your lifestyle or health can also affect your menstrual cycle and/or cause your periods to stop. This includes:

Other conditions can also cause cramping with no period. This includes:

Other causes of white discharge

If you have white vaginal discharge but no other symptoms, this is most likely part of your normal menstrual cycle.

However, if the vaginal discharge is not normal for you, then you may have an infection such as bacterial vaginosis or a yeast infection. Other symptoms of an infection include:

When to seek medical care

If your periods are not regular, see your GP. They can investigate what is causing your irregular periods.

You should also see your GP if you have abnormal vaginal discharge. This includes:

Although cramping is a common period symptom, you should see your GP if your cramps:

Although white vaginal discharge and cramping with no period can be signs of pregnancy, there are many other conditions that can cause these symptoms.

Thick white discharge or foul-smelling vaginal discharge could be a sign of an infection. It is important to get treatment for infections, including STIs, as soon as possible to reduce the risk of complications.

Why do I have cramps but no period?

Your period may be late or, depending on your other symptoms, you could be pregnant or have one of several other conditions, such as pelvic inflammatory disease (PID), endometriosis, uterine fibroid or polyps, or polycystic ovary syndrome (PCOS). If you are concerned your cramps aren’t going away or are getting worse, see your GP.

Could I be pregnant if I have cramps but no period?

Yes, you could be pregnant if you have cramps but no period, however there are also other conditions that can cause these symptoms. Additional symptoms of pregnancy include vaginal spotting, white vaginal discharge, backache, nausea, vomiting, dizziness, fainting, and achy, tender breasts.

Why do I have cramps but no period on birth control?

If you have recently started taking birth control, you may experience mild cramping as your body adjusts. If you are on birth control and have persistent or severe cramping, see your GP.

Why is my period late but pregnancy test negative?

If your period is late but your pregnancy test is negative, your period may be late, which can occur due to a number of different factors including, stress, anxiety, excessive exercise, extreme weight loss and illnesses. Your periods may also be late or irregular if you have uterine fibroids or polyps, pelvic inflammatory disease (PID), polycystic ovary syndrome (PCOS) or perimenopause.

What is endometriosis? And the signs you shouldn’t ignore

Endometriosis is a chronic (long-term) condition that affects one in 10 women of reproductive age in the UK.

Endometriosis affects one in 10 women in the UK and can be a debilitating condition.

A fibroid is a non-cancerous growth that occurs in or around your womb (uterus).

Around one in three women have fibroids. These non-cancerous growths only develop during the reproductive years.

Pelvic pain, also known as lower abdominal pain, in women is any pain that occurs in the area below your belly button.

Six things you should know about cervical cancer

Every day around eight cases of cervical cancer are diagnosed in women in the UK.

What is endometriosis and how is it treated? Mr Mohan Kumar, Consultant Gynaecologist, explains

If you're experiencing pelvic pain, painful periods, and pain during and after intercourse, you might have endometrio...

Signs and symptoms of the menopause

The menopause is a natural process that marks the time in your life when you stop menstruating.

Rectovaginal endometriosis occurs when tissue similar to the lining of your womb (endometrium) starts to grow elsewhere.

Over the last five years Cahoot Care Marketing has built an experienced team of writers and editors, with broad and deep expertise on a range of care topics. They provide a responsive, efficient and comprehensive service, ensuring content is on brand and in line with relevant medical guidelines.

Lux has a BSc(Hons) in Neuroscience from UCL, a PhD in Cellular and Molecular Biology from the UCL Institute of Ophthalmology and experience as a postdoctoral researcher in developmental biology. She has a clear and extensive understanding of the biological and medical sciences.Having worked in scientific publishing for BioMed Central and as a writer for the UK’s Medical Research Council and the National University of Singapore, she is able to clearly communicate complex concepts.

Alfie has a creative writing degree from UCF and initially worked as a carer before supporting his family’s care training business with copywriting and general marketing.He has worked in content marketing and the care sector for over 10 years and overseen a diverse range of care content projects, building a strong team of specialist writers and marketing creatives after founding Cahoot in 2016.