CT scans and MRI scans are non-invasive methods to capture images of the inside of your body.

CT stands for computed tomography. A CT scan uses specialised X-ray equipment to capture two-dimensional X-ray images of the inside of your body from different angles. A computer is then used to process these X-ray images into a three-dimensional image.

Both CT scans and MRI scans are very low risk methods to image the inside of your body. However, there are differences between the two that may make one more suitable than the other.

What is an MRI scan?

An MRI scan can create images of the inside of the body due to the magnetic properties of water, which makes up around 60% of the human body. An MRI machine contains strong magnets, which affect the hydrogen atoms in water molecules. When radio waves are directed at the body, they bounce off the magnetised water molecules and are detected by the MRI machine. These signals are sent to a computer, which translates them into images.

What happens during an MRI scan?

An MRI machine contains a long open-ended tunnel and a sliding patient table. You'll be asked to lie down on the sliding table and moved into the tunnel, either head first or feet first, depending on which part of your body needs to be scanned.

During your scan, you'll be asked to lie still. The MRI machine will make a lot of noises, such as banging, clanging, clicking and whirring. Before you’re moved into position for your scan, you'll will therefore be offered earplugs or headphones to help muffle or mask the noises.

What is a CT scan?

Using specialised X-ray equipment, a CT scan, also known as a CAT scan, captures images of the inside of your body from multiple angles in order to create a 3D image.

It's often used to diagnose bone fractures and damage or disease of internal organs, such as the small intestines, colon and brain — a brain CT scan can determine whether a stroke was ischaemic or haemorrhagic. A CT scan is also used to detect and monitor tumours, locate internal bleeding, evaluate head trauma and investigate pain where the cause is unclear.

What happens during a CT scan?

A CT scanner contains a large doughnut structure with a sliding patient table that passes through the doughnut. You'll be asked to lie down on the sliding table and will be moved through the doughnut, either head first or feet first, depending on which part of your body needs to be scanned.

The CT scanner will capture two-dimensional X-ray images at different angles through your body. A computer will then turn these X-ray images into a 3D image of the inside of your body.

What can a CT scan show that an MRI scan can't?

CT scans can be captured quickly while MRI scans are slower. This makes CT scans more suitable in emergency situations where a rapid diagnosis is vital eg when someone presents with symptoms of a stroke, a CT scan can be used to quickly determine whether the stroke is ischaemic (caused by a blood clot blocking a blood vessel) or haemorrhagic (caused by a blood vessel bursting).

MRI scans are usually used in non-emergency situations, where more time is available to collect more detailed images of the inside of the body. 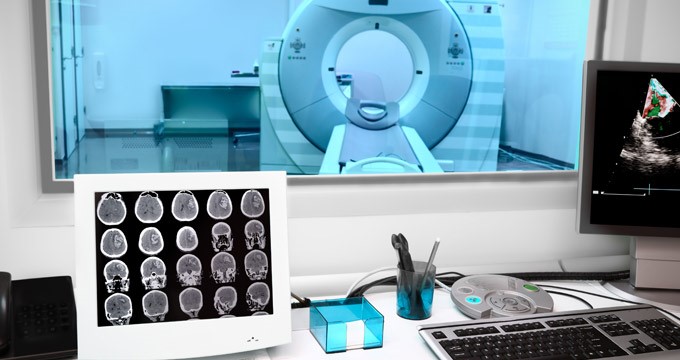 What is the difference between an MRI scan and a CT scan?

CT scans and MRI scans use different techniques to capture images of the inside of your body — CT scans use X-rays while MRI scans use magnetic fields and radio waves. CT scans are less expensive than MRI scans but MRI scans provide greater detail.

There are also different risks and benefits between CT scans and MRI scans.

Both CT scans and MRI scans can capture images of your soft tissues and bones but CT scans are faster. However, MRI scans capture greater detail. It's therefore easier to see subtle differences between tissues using an MRI scan.

CT scans and MRI scans are both low risk methods to capture images of the inside of your body. However, there are still some risks and both types of scan are not recommended during pregnancy, particularly in the first three months in the case of MRI scans.

For either scan, your doctor may recommend using a contrast dye, taken orally as a drink or given as an injection, to make the images captured clearer. Some people can develop an allergic reaction to the contrast dye, which is usually mild but in very rare cases can be severe.

Other risks of CT scans

As CT scans use X-rays, you will be exposed to low doses of radiation. However, the risk of developing cancer as a result of this exposure is very small.

Other risks of MRI scans

MRI scans are noisy, so you may experience some hearing discomfort. During long scans, you may feel warm. Some people also feel claustrophobic while lying down in the scanner. Although there are open MRI machines, which are less claustrophobic, they don't produce as detailed images as traditional MRI machines.

If you have metal implants, an MRI scan may interfere with them. You should therefore tell your healthcare team before your MRI scan if you have:

Some permanent cosmetics or tattoos also contain traces of metal and can therefore be affected by having an MRI scan.

In addition to the risks of having an MRI scan, for some people who are obese, it may not be possible to have an MRI scan. This is because certain MRI machines have a weight limit, usually around 160 kg, and all MRI machines are limited by the size of the tunnel in which patients must lie. However, at Spire Healthcare, several of our hospitals do provide MRI scans for heavier patients using MRI machines with wider tunnels.

Are CT scans and MRIs safe?

Both CT scans and MRI scans are painless, non-invasive and generally considered safe. Although every scan comes with some low risks as mentioned above.

Choosing between an MRI scan and CT scan

In most cases, your doctor will recommend the most appropriate scan based on your symptoms, how much detail they need to see to make a diagnosis, whether you're pregnant and whether you're claustrophobic or are otherwise likely to struggle with having a certain scan.

If more detailed images of your soft tissues are needed or they suspect a herniated disc or torn ligament, they'll usually recommend an MRI scan.

Does a CT scan show inflammation?

Yes, a CT scan can detect inflammation, as well as infection or injury to your soft tissues.

Which is better for back pain, an MRI scan or CT scan?

What are the disadvantages of a CT scan?

A CT scan uses X-rays, so you will be exposed to low doses of radiation. CT scans also do not capture as much detail as an MRI scan.

Is a CT scan or MRI scan better for imaging the liver?

This depends on what your symptoms are and how much detail your doctor needs to see to make a diagnosis. In general, MRI scans reveal more detail than a CT scan and can be used to more accurately detect the amount of fat, scarring and inflammation in the liver.

Yes, a CT scan can detect bowel problems, such as polyps, cancer and inflammation.

Yes, a CT scan can detect sinus inflammation, as well as infection of the sinuses, fluid-filled sinuses, nasal polyps and other obstructions.

Peripheral vascular disease affects around one in five people aged over 60 in the UK.

Anaemia is a condition where you haven’t got enough healthy blood cells to carry oxygen around your body.

Before having a colonoscopy, you need to empty your colon so that your doctor can see the inside of your colon clearly.

Living with inflammatory bowel disease: from symptoms to treatment

Inflammatory bowel disease refers to a group of conditions that cause the lining of your bowel to become inflamed and...

Over the last five years Cahoot Care Marketing has built an experienced team of writers and editors, with broad and deep expertise on a range of care topics. They provide a responsive, efficient and comprehensive service, ensuring content is on brand and in line with relevant medical guidelines.

Lux has a BSc(Hons) in Neuroscience from UCL, a PhD in Cellular and Molecular Biology from the UCL Institute of Ophthalmology and experience as a postdoctoral researcher in developmental biology. She has a clear and extensive understanding of the biological and medical sciences.Having worked in scientific publishing for BioMed Central and as a writer for the UK’s Medical Research Council and the National University of Singapore, she is able to clearly communicate complex concepts.

Alfie has a creative writing degree from UCF and initially worked as a carer before supporting his family’s care training business with copywriting and general marketing.He has worked in content marketing and the care sector for over 10 years and overseen a diverse range of care content projects, building a strong team of specialist writers and marketing creatives after founding Cahoot in 2016.