Rowing enthusiast John Hart has had to ‘hang up his oars’ after more than fifty years of skimming along the Thames.

But, thanks to a pioneering hip operation, the 86-year-old former lecturer is still managing to keep very active – working hard on his allotment in Mill Hill, Barnet, to produce a full array of flowers and vegetables.

Mr Hart, a councillor with Barnet Borough Council, underwent an anterior hip replacement at Spire Bushey Hospital in Watford, when pain made rowing a virtual impossibility.

Thanks to the muscle-sparing nature of the operation, Mr Hart was up and about in days and is now able to get around without the help of a stick and with virtually no hip pain whatsoever.

Consultant Orthopaedic surgeon Mr Panos Gikas explained: “The operation avoids any muscle damage, allowing the replacement parts to be fitted through a tiny incision – at 8cms it is much smaller than normal.

“By not cutting any muscles around the hip and working through a small ‘window’ in the tissues, the hip can be replaced with minimal soft tissue damage which leads to faster recovery, shorter hospital stay and quicker return to full function.

“In effect, instead of cutting through key muscles we simply move them out of the way, putting them back into place when the procedure is completed.”

The muscle-sparing, minimally-invasive technique is now being performed by a steadily growing number of surgeons throughout Europe.

“Patients have made an enhanced recovery with this muscle-preserving approach and are more confident with their hips at an earlier stage. This is due to the fact that muscle damage is avoided and therefore the hip can return to normal function quicker.”

Mr Hart said he had put up with the growing amount of hip pain over the last couple of years.

“Being right-handed I rowed stroke side, so that the main stress was on the left hip. I admit that – out of vanity - I probably pulled much too hard. At 5ft 9in I am small for an oarsman so I always made up for that through extra effort,” he said.

“Having to walk with a stick was interfering with my council activities as well as everyday things such as going shopping. Travelling on the underground while lame and with a stick had become tiresome – although many kind young women jumped up to give me their seats!”

He is now able to crack on with his latest hobby of portraiture drawing which he has been doing at the City Literary Institute.

“Travelling to lessons was getting more and more difficult and just standing at the easel had become very painful.”

“My recovery is going very well. My eyesight prevents me driving to the Thames to re-join my old rowing friends but I’m still keeping very active in the allotment I have had since 1961. The drought and my hip pain have put paid to this year’s crop but I’m already getting the ground prepared for next year.” 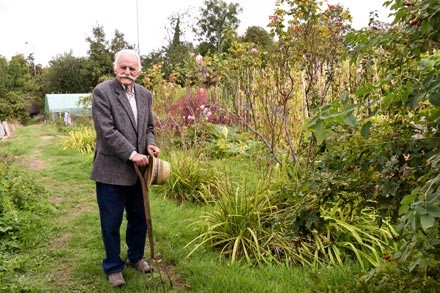