She’s enjoyed more than thirty years in nursing but now Pat Munday, a Matron at Spire Parkway Hospital in Solihull, near Birmingham, West Midlands, has decided to call it a day so she can spend more time with her newly-arrived grandson Freddie.

Pat, who trained at Wrexham Maelor Hospital before qualifying in 1980, has spent the last three years at Spire Parkway following a career that took her to hospitals in Gloucester, Cirencester and the West Midlands.

She said: “It has been the most amazing career I could have ever wished for. I have so many memories - one day I think I should put them all into a book - 'Memoirs of a Matron!'

“Seriously though, it is the most privileged position where you get to meet people at the most vulnerable times of their lives and hopefully impact in a positive way - I wouldn’t change a second.”

Although Pat, who lives in Knowle with husband Stephen, plans to make relaxation a retirement priority, she is also looking to get involved in charity work in the area.

Of her time at Spire Parkway she said: “In the scheme of things I wasn’t there that long, but I really did make some great friends who I am sure I’ll keep in touch with for a long time to come.” 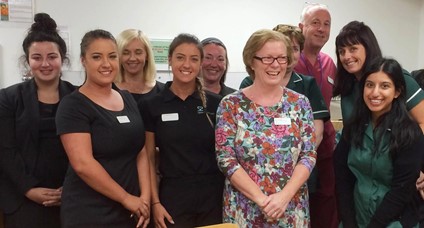