But less than nine months after having two hip replacements, retired PE teacher Philip, from Redditch, is already back swimming three times a week, walking three miles a day and looking forward to returning to cycling across the Cotswolds as his recovery continues.

"I enjoy my exercise. In fact, you could say it’s been a lifelong passion for me," Phillip explains. "So I when I was forced to stop cycling and ended up using a walking stick to get around the house because of my hip pain, I was devastated. Exercise has been my life – for work and pleasure – so I knew I needed to take action and not let this beat me."

"My GP put me forward for some physiotherapy sessions, however I felt it wasn’t working for me and my hip pain continued. My walking became more and more restricted. I began feeling very low, not only was the hip pain causing me physical pain, but mentally I was struggling with the thought of not being able to be active."

Philip went back to his GP and was referred onto a hip specialist who confirmed not only did Philip require surgery on his right hip, but his left hip also needed treatment.

"I was due in for surgery in March 2020, but we all know what happened – covid hit and I faced months of uncertainty as to when I’d be treated.

"Thankfully I was advised of services at Spire Parkway Hospital and I was able to see Mr Isaac in the September." 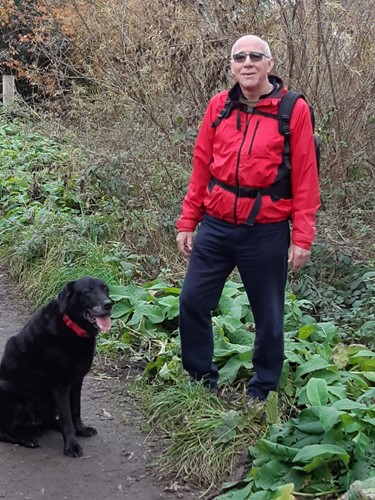 "When I first met Philip, I could see he was in great pain. His mobility had reduced significantly and as someone who thrived on being able to exercise, it was obvious he was struggling" said Mr Sherif Isaac, Consultant Orthopaedic Surgeon from Spire Parkway Hospital in Solihull.

"Philip was a very fit man but, as happens to many people, he’d simply ‘wore away’ part of his hip. This can be for a variety of reasons – a genetic predisposition such as thinner cartilage or a slightly mismatched ball and socket or he may have had ‘repetitive trauma’ over time from his sporting activities."

Whatever the problem, it had reached the stage where a complete hip replacement was needed if he was going to be able to walk ‘pain free’ in the future.

Philip, with his fitness knowledge and expertise, took a focused approach to his surgery. He said: "I knew I needed to have a good mindset to tackle both the preparation and recovery from surgery, so I followed all the pre-op advice and prepped for surgery by exercising four times a day.

"I knew that the end goal wasn’t to have surgery, but to be recovered from the surgery. I motivated myself in order to give myself the best possible chance of returning to my previous fitness levels. I needed to put the work in and help myself."

With such steely determination, Philip was able to return to swimming three times a week just two months after surgery.

"Undoubtedly, Philip’s focus on helping himself to recover was instrumental to his recovery – and preparation for his next surgery," Mr Isaac explained. "Whilst hip replacement surgery tackles the initial crumbling of the hip and can remove the pain patients feel, enabling them to move more freely, we strongly recommend patients do what they can to strengthen their muscles and restore flexibility to their joints."

Following successful surgery and recovery with his right hip, Philip was ready to undergo surgery again for his left hip.

"Recovery from hip surgery is based on a number of factors, including whether a patient has any other health conditions and their age. Philip was fortunate that he was healthy and that he’d really driven himself to not only follow the aftercare advice, but that he also prepared himself as much as possible before having surgery, this enabled him to go on and have surgery on his left hip," Mr Isaac concluded.

"I recovered even better from my second surgery," Phillip gushed. "I took advice from my anaesthetist with the painkillers I needed to take to help manage the pain."

"Living through lockdown with mobility restrictions made me realise how important being able to exercise is for me, physically and mentally."