A new steam injection treatment that could bring relief to thousands of men suffering with an enlarged prostate is being used at Spire Bushey Hospital.

Mr Jamieson had been suffering bladder problems due to an enlarged prostate for several years and was waiting for TURP (Transurethral Resection of the Prostate) operation in which part of the prostate is removed.

However, after reading an article about the development of the Rezum treatment, he met with Consultant Urologist MR Jacques Roux at Spire Bushey.

“I began to get bladder infections in 2017 and tests showed they were being caused because my bladder was not emptying properly. It was decided that I would benefit from the more traditional TURP surgery but, once I had read about the much less intrusive Rezum method, I was keen to find out more about it,” said Mr Jamieson.

“I knew it was a very new procedure but the prospect of it being done in a day and needed just a local anaesthetic, certainly appealed to me.”

Mr Roux explained: “The treatment involves injecting steam into the prostate tissue that is obstructing the water flow pipe. Once removed pressure on the pipe is relieved and the water flow returns to a much more normal and healthier rate.”

Tests have shown that, in some cases, the prostate has been reduced by more than a third (36%).

Mr Roux added: “The treatment is quicker and can be done under either local or general anaesthetic as a day case. It involves injecting the steam which creates a one cubic centimetre area of necrosis (dead cells). The tissue is then absorbed by the body, allowing the urethra to widen.

“Although the results are the similar to other treatments already offered, Rezum has less severe side effects, preserves urinary and sexual function and patients can get back to regular activities within a few days.”

Seven weeks after the operation Mr Jamieson said the recovery had been excellent with very little pain or discomfort.

“The actual operation went very well although I did have to grit my teeth with each (in my case five) of the short bursts of steam, but I was warned before each, and it really wasn’t a problem.

“As for benefits, I feel back to normal with mostly one call of nature each night and sometimes sleeping right through. I had long forgotten what it was like to pass water normally, but now I can and it really is a great relief.” 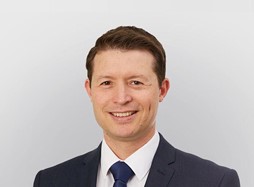