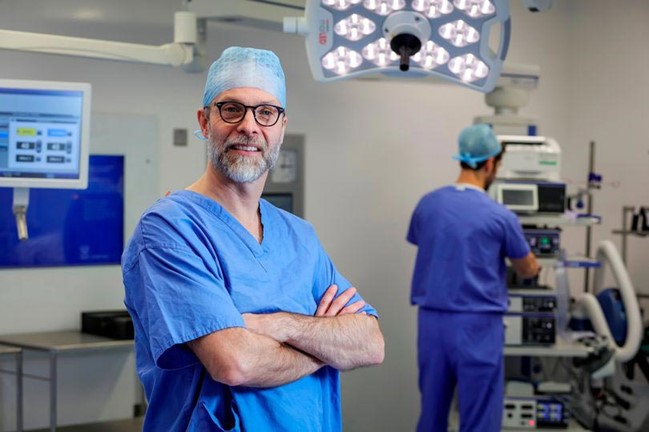 It is a long way from a fjord and the weather is certainly different, but Icelandic breast surgeon Kristjan Asgeirsson has definitely warmed to his adopted home of Nottingham.

The father of three, whose family still live in Iceland, has spent the last three years dividing his time between Nottingham, Iceland and the Faroe Islands combining surgery and research while still managing to enjoy regular ‘family suppers’ thanks to the wonders of FaceTime and Skype.

The surgeon is a specialist in oncoplastic surgery, a form of treatment in which reconstructive work is carried out as the lump is removed, helping preserve the appearance of the breast while containing the damage done by the tumour.

Kristjan did his surgical training in the UK and a fellowship in breast and oncoplastic breast surgery at the Nottingham Breast Institute before returning to Iceland in 2007.

Back home, he established an oncoplastic breast surgical service in Reykjavik, as well as being appointed as an associate professor of surgery at the University of Iceland.

Eight years after returning home, in 2015 his former mentor Mr Douglas Macmillan gave him the opportunity to join the team at the Nottingham Breast Institute.

He worked as a consultant oncoplastic breast surgeon but the role also allowed him to help develop the institute’s ‘high-risk family history service’ at Nottingham Breast Institute.

He said: “I have a particular interest in counselling and offering risk reducing surgery to women who have a genetic predisposition to getting breast cancer such as those with BRCA gene mutations.”

He moved back to Nottingham and, at the beginning of last year, started a private practice at Spire Nottingham.

“I have been extremely impressed with the facilities and the people that work there. I believe there is a great foundation in place to build up a fantastic service in my specialty of breast and reconstructive breast surgery, and I am looking forward to building this up in the years to come.”

Having lived in Ravenshead while training in Nottingham, Kristjan is more than happy to be back in the county, not least because the countryside and forest paths allow him plenty of space to indulge in his passion for running – matched only by his love of fishing when he goes back to Iceland.

Back home he still works primarily with a ‘risk reducing’ service in Iceland but also travels to the Faroes where he performs surgery on the islands’ breast cancer patients.

“During the weeks I am in Nottingham I work pretty long hours so time does go quickly. However, I still miss my family so I’m grateful to FaceTime and Skype as it means we can share supper time together even though we are in different countries,” he said.

He’s worked actively towards promoting oncoplastic breast surgery in the Nordic countries, which has lead to an influx of Icelandic patients at the hospital, as women take advantage of an EU ruling that allows patients to seek medical treatment in other EU countries with treatment costs being met by their own government.

“The only prerequisite is that the similar treatment is offered in their home country so, in effect, patients cannot seek unconventional treatment or treatment that is not recognized back home,” Kristjan explained.

“Icelandic patients that have wished to come to me to have their surgery at Spire Nottingham Hospital, have done this under this legislation. Of course they have to pay their own travel and accommodation costs but the scheme is popular in Iceland and in other Scandinavian countries.”