Dad-of-three, Stephen Sharp was a very active sportsman in his younger days, but a series of injuries forced him onto the sidelines. His break from sport - along with him being an insulin-dependent diabetic - meant that as time went by, activities became harder. Even walking caused chronic lower back pain. But he had a dream that he would one day climb Mount Snowdon!

And lo and behold, the 59-year-old, who lives in Solihull, did in fact defeat the mountain in June 2016. However, the second attempt failed due to severe back pain.

“I had struggled for years, becoming less and less active. So I decided enough was enough! I joined a gym, hired a personal trainer, got fitter and stronger and lost 4.5 stone. I felt so much better, that we arranged a second attempt up Mount Snowdon the following year” he said.

Unfortunately, he only made it halfway up the climb before severe back pain meant he had to admit defeat and make his way back down and wait patiently for his friends to finish the trek.

Things deteriorated and Stephen was struggling to walk without an aid, do up his own shoe laces and, worst of all, he couldn’t pick up his eight-year-old grand-daughter.

After seeing an Osteopath who spotted that the problem could well be in his hip and not his back, Stephen booked to see Orthopaedic Surgeon Mr Trevor Lawrence at Spire Parkway Hospital in Solihull, Birmingham West Midlands.

“An X-ray of my hip showed quite clearly that it was severely limiting my mobility and quite likely causing most of my back pain. We discussed my problems and decided that a total hip replacement would be the best solution,” said Stephen.

“It isn’t surprising if someone has pain in their back, that they think their back is the problem,” explained Mr Lawrence. “However, in many cases it can be caused by a damaged hip or knee joint.

“A faulty hip joint will cause people to unknowingly change their posture and the way they walk. This in turn means they are putting extra pressure on their back, as they over compensate for the lack of mobility in their hip.

“Once the hip is fixed people can begin to move in a more natural way - thus taking the extra strain away from their lower back and spine. Providing he sticks with the physiotherapy, I don’t see any reason why Stephen won’t be getting to the top of the mountain some time in the future.”

As for Stephen, who had of course already planned a third attempt at his favourite mountain, he was back at the foot of the climb just nine weeks after leaving hospital with a large group of friends making the trek with him.

Although he had plans to reach the summit when the expedition was first planned, he didn’t know that he’d be attempting it with a brand new hip! He realised that there simply wasn’t enough time to train fully and decided he would, this time, be happy reaching the halfway stage.

“It was tough for sure, but after a few hours on Snowdon I was satisfied with reaching the half-way point. It had been a tough year but I felt I was on my way to a full recovery,” he said.

“Well I’m determined to set myself another challenge, (but) whether this will involve a mountain or not, is still to be decided,” he added. 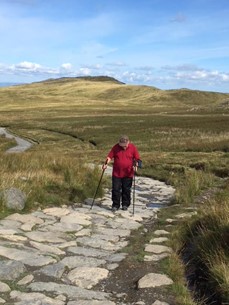 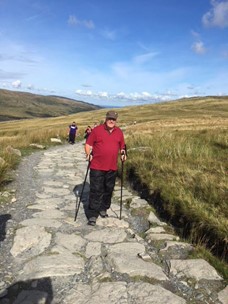