GB Basketball has today announced Spire Manchester Hospital as the official healthcare partner to both the Men’s and Women’s Basketball squads as well as the title sponsor for the upcoming Women’s game against Canada later this month.

The announcement was made during a visit by the GB Women’s side to Spire Manchester Hospital in Didsbury as the team took the opportunity to have a look over the impressive facilities on offer before presenting the Hospital with a Molten basketball.

As part of the agreement, Spire Manchester Hospital will offer medical and healthcare services to all senior GB players whilst they are on international duty and fall under the care of GB Basketball.

Andrew Eadsforth, Hospital Director at Spire Manchester Hospital said: “We are delighted to be sponsoring the GB basketball teams in what are very exciting times indeed. The popularity of the sport throughout the country has increased over the past few years and we hope that our backing will help keep the teams fit and healthy as they look to progress to the 2020 Olympics.”

Maurice Watkins CBE, Chair, British Basketball Federation said: “We’re delighted to welcome Spire Healthcare into the GB basketball family and thank them for their support for basketball through providing vital healthcare cover to keep our athletes safe at all levels, as they head into important international competitions. As we work to realise basketball’s full potential in our country, building commercial relationships such as this is crucial to our sport’s development.”

Spire Manchester’s support comes at a perfect time as both GB sides gear up for some critical games. In the build-up to FIBA Women’s EuroBasket, the GB Women are involved with tournaments in Slovenia and Spain as well as a home game against Canada on 19 June at the National Basketball Performance Centre in Manchester, with a 7:30pm tip. The game will be known as GB v Canada presented by Spire Manchester Hospital.

The FIBA Women’s EuroBasket will be held across Latvia and Serbia as 16 teams compete for the FIBA Women’s EuroBasket crown. Held between June 27th and July 7th, the tournament also serves as a qualifier for the Women’s Olympic Pre-Qualifying Tournaments. Great Britain will face Ukraine, Latvia and 2017 Champions Spain in the group stages of the tournament. All three games will be held at Arena Riga in Latvia.

GB’s Men will be playing FIBA EuroBasket 2021 pre-qualification games against Kosovo and Luxembourg this August, with home games scheduled for the 10th and 17th of the month. Topping the three team group would see GB enter the main qualification pot for the tournament proper. 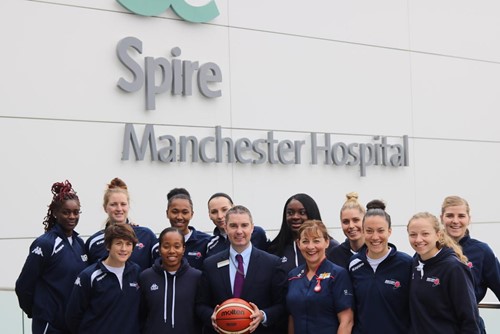 Rachael had been suffering for several years with light headedness and feeling faint. She had also noticed unusual lumps…