Spire Manchester Hospital has just been awarded an 'Outstanding' rating following an inspection by the Care Quality Commission.

Spire Manchester Hospital, which opened in January 2017, received ‘Outstanding’ in three of the five categories - caring, responsive and well led - while it achieved a ‘Good’ rating in the other two categories.

Three rankings of the same grade – in this case outstanding – determine the overall rating the hospital receives.

CQC Inspectors carried out a rigorous examination into services offered at Spire Manchester before making comments such as:

The hospital, based in Didsbury, employs over 450 people and cost in the region of £65 million to build.

Hospital Director Andrew Eadsforth said he was absolutely delighted with the rating which he described as ‘a credit to everyone at the hospital’.

"The CQC inspection really is crucial to us as a hospital and for us to get an overall ‘Outstanding’ rating is something we are all very proud of.

"It demonstrates a very strong performance from staff across the whole hospital with the consistent delivery of high standards of care throughout.

"When people come to a hospital they expect the best in healthcare and I think this rating shows that we can meet all those expectations.”

Inspectors also praised hospital staff for providing a 'strong and visible person-centred culture' and that they were 'highly motivated and inspired to offer care that was kind and promoted people’s dignity'.

Hospital Matron Dawn Davis added: "I have always known we had a great team here – not just the nurses but throughout the entire hospital – and this result just confirms that."

"It’s great to receive such recognition and I actually think it will spur us on to even better things in the future." 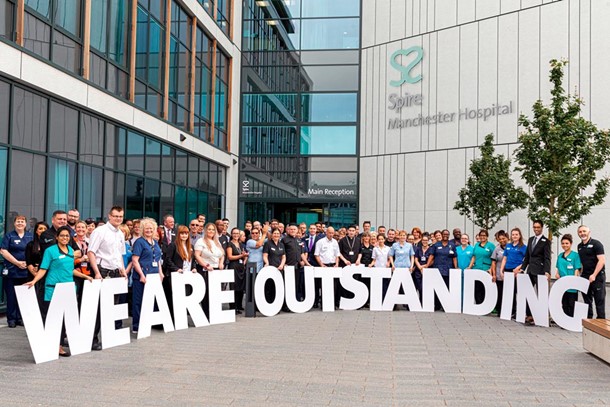