Following treatment for breast cancer, 56-year-old Sue Judge developed lymphoedema to the extent that, at its worst, her left arm was 75% larger than her left.

“I can’t explain how badly affected me - I hated it more than anything I had endured during my treatment for breast cancer, and that includes a mastectomy,” explained Sue. “I was confident I could live without a breast but living with lymphoedema was really traumatic.”

The body’s lymphatic system is a network of channels and glands that help fight infection and remove excess fluid to areas of the body where it can be naturally disposed of.

When lymph nodes are destroyed or removed, as happens during some breast cancer treatments, the body can develop lymphoedema where the limb – usually arms or legs – swell and remain swollen.

“My arm just continued to get bigger. It was heavy and uncomfortable. My jackets, coats and blouses just didn’t fit me – I couldn’t get my left arm into my normal clothes,” said Sue, a mum-of-one who lives in Stockton on Tees in County Durham.

“It just made me feel feel ugly and depressed. I was forced to buy new clothes that were size 16. In the past I had been a size ten so having to wear things that were obviously too big for the rest of my body really was upsetting.

“It affected my confidence and my day-to-day happiness and stopped me doing many of the things I had previously enjoyed. At night I could not get comfortable in bed and had to reposition pillows to rest my arm. Getting a good night’s sleep was difficult to say the least.”

The couple met at Spire Parkway Hospital in Solihull, near Birmingham West Midlands, where Ms Dancey has her private practice and discussed Sue’s problems and what could be done about them.

Ms Dancey explained: “Sue had severe lymphoedema that was causing her significant functional problems so, while performing the breast reconstruction, I also carried out a lymph node transfer to replace the lymph nodes she had lost during her cancer treatment.

“The procedure involves harvesting lymph nodes from the groin area and using them to replace the missing ones in the arm. Once they are established and begin to function, the fluid in the arm reduces and feelings of heaviness and aching ease.

“In patients with longstanding lymphoedema there are often fatty changes in the limb. The fat grows in response to the nutrient-rich lymphatic fluid bathing the cells and encouraging fat deposition. But the fatty changes can be removed by liposuction as we look to getting the limb back to a more normal size.”

Now with her arm just 20% larger than the other and with another liposuction treatment on the horizon Sue is delighted with the way things are progressing.

She said: “Before my surgery I had been a little rash in buying a very expensive Fendi coat in size 10! I didn’t know how successful the operation or the liposuction was going to be so it was ‘a bit of a risk’ buying a coat I might never be able to wear.

“However, once I got home from hospital the first thing I did was try it on and – to my absolute delight – it fitted me! I was so pleased I immediately took a picture of me wearing it and sent it straight to Anne.

“She is an amazing surgeon but also a lovely person. I will be forever grateful for her clinical expertise as well as her ongoing support.  Lymphoedema was a real nightmare but, thanks to Anne, I am now in a much better place both physically and psychologically.” 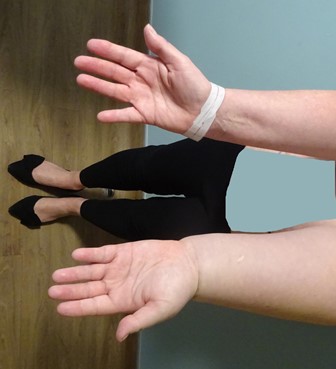 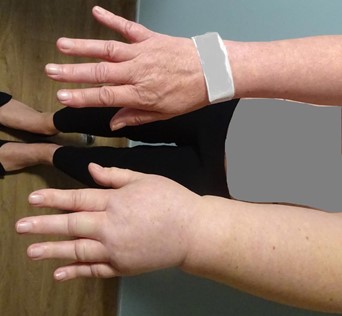 Above pictures, Sue's arms before surgery 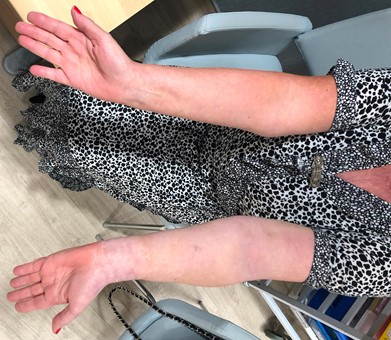 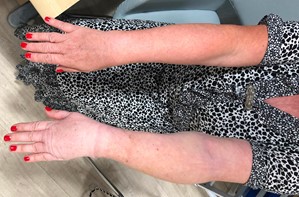 Above pictures: Sue's arm after surgery

Above picture: Sue in her Fendi coat post surgery!

A: Yes, you can. Our self-pay team can talk you through this and explain the finance options that are available, should you wish to explore them call 0121 704 5530 or send an enquiry