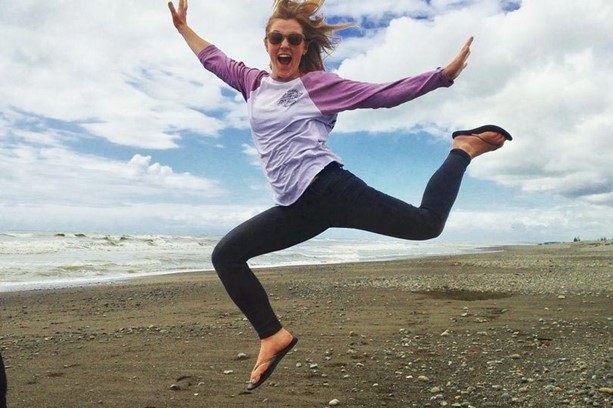 She’s an adventurer who has visited more than 30 countries, but when Emily Webb broke her collarbone while in New Zealand she knew it was time to head home to Nottingham for treatment.

Emily Webb, 24, first broke her collarbone while skateboarding in France but made things much worse when she slipped in the shower while working as a nanny in New Zealand. But when doctors explained the extent of her injury – even telling her she would need a bone graft from her hip - it was back to West Bridgford and her mum, as Emily sought some home comforts and a top orthopaedic surgeon who specialised in shoulder repairs.

She said: “I love travelling and I’m used to living in a van but when they said I needed surgery – and probably a bone graft from my hip – I knew it would be best to go home.”

“I was in a lot of pain and, to be honest, a little frightened by the talk of a bone graft so I was very keen to meet with Mr Gooding who I had received some very good reports about.”

Her surgeon said: “When I met Emily she had been suffering with a painful broken collarbone for over a year. Most injuries like this will heal on their own within a couple of months, but this hadn’t been the case with Emily.

“The fall in the shower made things even worse and, to be honest, she really was in need of an operation by the time she came to see me.”

“We discussed treatment options and I explained to her that by using cutting-edge stem cell technology we could avoid the need for a graft.

“I treated the break with a compound that stimulates stem cells and bone healing alongside a stainless steel plate that was specially designed to fit her collarbone perfectly and screwed into place to absolute exact specifications. The plate is very low profile so it doesn’t cause irritation under the skin in later years.

“This in itself is a breakthrough in dealing with fractures like this but it is the stem cell part of the procedure that really sets the treatment apart.

“This mix was placed at the site of the broken collarbone and formed into a scaffold with the stem cells being stimulated to form new bone around it. Combined with the plate and screws this allowed Emily’s bone, which had failed to heal naturally in over a year, to join together solidly.

“The end result should be something as near as possible to her natural collarbone.”

Six weeks after her operation Emily was back in the clinic and pain free with X-rays showing good bone healing. Everything has now healed and she is back enjoying life - including her many sports.

Now back in New Zealand, action-girl Emily, who studied for a degree in design and communications at Northumbria University, is having a great time skating, wake boarding and skiing, along with many other outdoor activities.

“I graduated in 2014 and have been travelling since then. People wonder how I afford it but I have managed to always find work wherever I end up. I've done cleaning, gardening, bar work and even been paid to write blogs and do photography.

“I will settle down at some stage but for the moment I’m just enjoying seeing the world and having a great time. Thanks to Mr Gooding and his team, my shoulder isn’t holding me back and there are still a lot of places I want to see.”