How did you find the hospital and Mr Gaston?

I didn't have much pain in my hip, but, in hindsight, it had been becoming progressively stiffer and twisted outwards without me realising. I'd been unknowingly compensating for this, but had been getting aches and pains in various muscles and even in my ankle (because I was walking on the side of my foot). Eventually I saw a physiotherapist for help with one muscle that had been particularly painful for a year, especially when walking. It was she who noticed how arthritic and rigid my hip was. When I saw my GP, he agreed. I was very shocked, particularly since I still didn't have a lot of pain and my level of activity remained quite high. But when I found that I couldn't flex my hip enough to cycle, I decided to seek specialist help.

I still could not believe that it would be bad enough to consider replacing. I hoped that a surgeon might advise a cheilectomy-type procedure that I had had done successfully to my knee 10 years previously, so the reason that I chose Mr Gaston was that he is experienced in arthroscopic hip surgery. The second reason was that - if the worse came to the worst - he uses the Mako-robot to assist hip surgery.

The first standout thing is that he was 15 minutes early, which was great. He is very organised, efficient, hard-working and confident. He was very forthright; the only possible solution was a total hip replacement, using a long-time tried and tested prosthesis but with an improved hard plastic surface on the acetabular component; and I would have to trust his experience and judgement in this.

How did you come to the decision to have surgery?

It was always about the bike. Everyone who knows me knows that I'm always on my bike. Can't cycle is no good, so no choice, really. But nevertheless, it was very shocking for me, and I did not tell many people about the planned operation because I couldn't quite believe that I would go through with it. I half-felt that I should wait until I had more pain, or more limitations, like so many NHS patients do, but I really did not want to get to that stage either.

One reassuring thing was that Mr Gaston and his anaesthetist (Dr Wilson) both hold each other in very high regard. Mr Gaston phoned me after my consultation to say that he realised that I had been shocked, but that it really was the only thing to do if I wanted to get on with normal life. I appreciated that.

It appears to have less variance in placement of the components, and limits unnecessary bone resection. More precise placement may lead to better function and possibly longevity, although it has not been around for long enough for studies to demonstrate this.

The facilities were excellent - a private room, en-suite bathroom, WiFi, fantastic food. The nursing staff were brilliant, attentive, smart and professional. The physio, Sean, was excellent and encouraging. The staff I met in theatre - the ODP, the surgical assistant, the Mako operator, and the recovery staff - were very friendly and efficient.

How was your immediate and longer term recovery/progress?

My operation finished at about 6pm, and the blissfully numbing effects of the spinal lasted until 10pm. After that, I had a very uncomfortable night because of muscle stiffness in my butt - I had to keep moving my leg every few minutes. I don't know if this was from the tissues being cut or bruised, or if they were "complaining" about being stretched into their new (straighter) position.

The night shift nurses were kind enough to help me to my feet at 2am, and this helped with the pain.

Mr Gaston conducts his post-op rounds at 7am prompt each morning: he described the pain succinctly: like being kicked by a horse. The second night was better because he prescribed a muscle relaxing sedative

Sean, the physiotherapist, got me walking on a pair of crutches the first morning. Walking eased the discomfort, and by the following morning I had conquered my Everest (a flight of stairs) and was discharged home.

I progressively lengthened my daily walks, ditched the crutches in favour of a ski pole after two days, and was up to two miles by the end of the week. I have been troubled with a kind of stiffening-up, cramping pain, which makes me have to stop and stretch every few hundred yards, and which has made it difficult to give up the stick. This has improved dramatically after being given some gluteal strengthening exercises at my three-week out patient physio appointment, and I don't need the stick at all now.

I'm only five weeks post-op at the moment. So milestones have been:

The best thing about having the procedure?

Well, it's only five weeks so far, so these are probably a bit tongue in cheek:

I think I would have benefited from more outpatient physio, perhaps weekly? My progress was measurable over the weeks, but it really did leap forward after my first outpatient physio session, so in hindsight I think that I should have booked more. 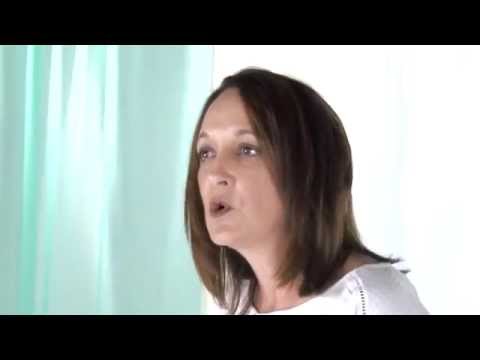 As part of an ongoing review of new services, we are delighted to be able to offer hysteroscopy as an outpatient procedu…