A pioneering hip replacement operation that avoids damaging many of the nerves and muscles that would be affected by conventional surgery, has been praised by 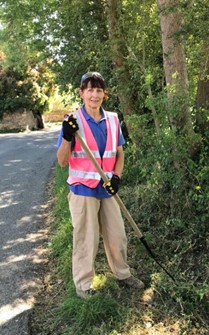 Rachel was actually out in the garden doing some ‘light weeding’ just days after the operation at Spire South Bank Hospital in Worcester.  The operation, carried out by Consultant Orthopaedic Surgeon Mr Nadim Aslam, avoids the dislocation of the hip, allowing the replacement parts to be fitted through a tiny incision – at 8cms much smaller than normal.

“The scar is absolutely nothing at all when you consider what kind of operation I went through,” explained Rachel.

“But most amazing was how quickly I was back on my feet as well as sleeping normally.”

Mr Aslam, who after qualifying as a surgeon went on to further train in joint replacements in Toronto and Chicago, explained: “By never surgically dislocating the hip there is little trauma to the surrounding muscles and tendons.”

“With this surgical technique, the implant is built inside the body, so the hip is never twisted into unnatural positions during surgery. In a way it’s a bit like building a ship inside a bottle – we go through a small space to operate in a larger space without ‘breaking the bottle.’

“By not cutting any muscles around the hip and working through a small ‘window’ in the tissues, the hip can be replaced with minimal soft tissue damage which leads to faster recovery, shorter hospital stay and long-term return to full function.

“In effect, instead of cutting through key muscles and nerves, we simply move them out of the way, putting them back into place when the procedure is completed.”

The muscle-sparing, minimally-invasive technique is now being performed by a steadily growing number of surgeons throughout Europe.

“Patients have made an enhanced recovery with this muscle-preserving approach and are more confident with their hips at an earlier stage. I believe this is due to the fact that by reducing muscle and capsule damage, they keep more of their joint positional sense.”

“It also means they need fewer painkillers after the operation and are usually able to return to work and to driving much earlier than patients receiving conventional hip operations,” said Mr Aslam.

As for Rachel, she said: “I was home in two days and actually working in my new garden three days after the op. I used a crutch for a few days but after that I was walking pretty well. Eight-weeks on and I was totally unaware that I had even had a hip replaced!”

“It was quite amusing when the family came over for Easter – I was up and about and organising everything – no-one could believe I’d had a new hip fitted just 11 days earlier.”