Penny has been keeping her eye on things since day one

Our state-of-the-art centre that has helped preserve the sight of thousands of patients is celebrating its tenth anniversary.

The Spire Eye Centre at Spire Little Aston Hospital in Sutton Coldfield opened in 2009 by Consultant Ophthalmic Surgeon, Miss Monique Hope-Ross, who unveiled the latest in laser and scanning technology available to patients.

Since then the Centre has treated over 6,400 patients and corrected more than 3,400 cataracts.

Now headed up by Consultant Ophthalmic Surgeon Mr Daniel Calladine, there has been a continual investment in cutting-edge technology - including an excimer laser which was brought in as part of a £200,000 development package - to keep it at the forefront of eye care in the Midlands.

Throughout its development, the Centre has had one constant factor - lead nurse Penny Ward who joined its ophthalmic team on day one.

“It all sounded quite exciting at the time,” said Penny. “But if someone had told me I’d still be here 10 years later I’d have thought they had gone mad!

“I was one of two part-time nurses then but we now have six qualified nurses and our own admin team of four people so we have certainly grown as we’ve gone along,” said 60-year-old Penny who was a nurse at Spire Little Aston Hospital when it first opened its doors in 1988.

“It is amazing how quickly things have moved along. What we thought was the very latest in treatments then have since moved on to such an extent they would be almost unrecognisable today.

“We have worked hard to develop one-stop treatment packages for all patients where tests and consultant appointments can be offered in a single visit. It is a small department but we have a great team – I can honestly say I’ve enjoyed every second here.” 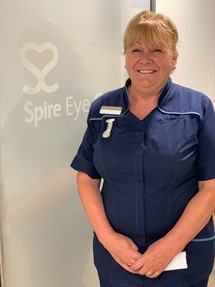