“It is amazing how just being able to brush your own hair can change your whole outlook on life,” great grandmother June Shakespeare gushes.

Over the past few years the 84-year-old had gradually been losing the use of her fingers and it eventually reached the stage where she could hardly use her hands at all.

But following surgery to reattach tendons that had worn away due to wrist arthritis June, who lives in Great Barr, is now able to grab back the many day-to-day skills that most people take for granted.

“Opening doors, taking lids off jars, holding a cup or taking money from my purse – even brushing my hair – had become almost impossible. You can’t imagine just how much that impacted my daily life,” she explained.

As the condition continued to deteriorate June met with specialist hand and wrist surgeon Mr Gunaratman Shyamalan at Spire Little Aston Hospital. He explained that not only could he help her get movement back to her hands but he could also perform the surgery while she remained completely awake.

He said: “Years of arthritis in the bones of her wrist meant that the tendons to her fingers had been severed or ruptured – it is not an uncommon condition in elderly patients.

“What I did was use sections of healthy tendons to repair the torn ones while carrying out repairs to the badly damaged ones. I used a technique called WALANT (Wide Awake Local Anaesthesia No Tourniquet) which meant she was able to stay awake throughout the entire operation.

“Not only does this seem to put patients at ease, but it also means they don’t have to recover from the effects of a general anaesthetic, which speeds up their actual recovery process.”

Now, following a series of physiotherapy treatments, June is delighted to have ‘excellent movement’ back in her wrist.

She said: “The operation went very well and I was delighted to be able to chat with people in the operating theatre as Mr Shyamalan carried out his work. It really put me at ease, both before and during the actual surgery.

“It really is beyond my expectations to be able to do some everyday things that most people take for granted and, as a bit of a bonus, there is hardly a scar to show for the surgery he carried out.” 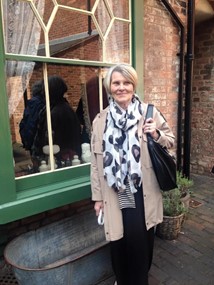