When Ivan Dagg was told by doctors that his cancer of the bowel had spread to his liver his future looked uncertain. He was given only a six percent chance of surviving five years with chemotherapy treatment and a fifty percent chance at best if he had liver surgery.

Today, five years after he was first diagnosed, Ivan, 53, an inspection engineer from Hull, is celebrating the start of a new year with his family. It’s a year he thought he might not be here to see. After having four surgical procedures and chemo to remove recurring tumours on his liver, his latest procedure, which is being hailed as ‘a world-first’ at Spire Leeds Hospital has given Ivan a reason to feel hopeful. 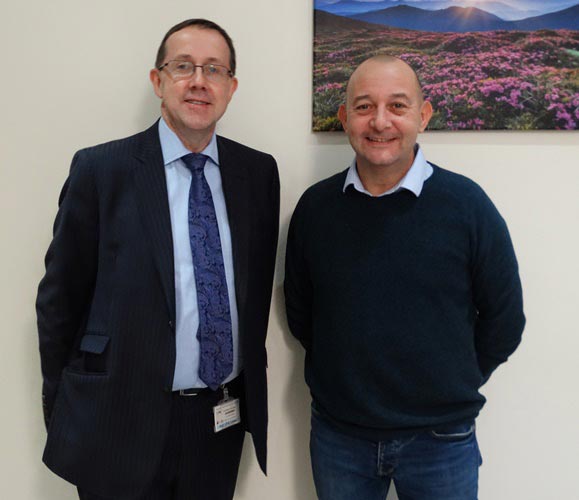 “The last few years have been a roller coaster. I’m finally feeling positive about my future,” said Ivan who is married to Kathryn and has two grown-up daughters.
Symptoms first started in 2013 when Ivan began to experience extreme exhaustion and lost weight. “I’d hardly ever been ill. I knew something was wrong, my condition worsened, and I started to pass blood.”

Ivan spent the remainder of 2013 going back and forth to GPs before being diagnosed in November that year with stage four bowel cancer. He had surgery in Hull to remove the tumour. He then discovered it had spread to the liver.

He was referred to Professor Peter Lodge, consultant hepatobiliary surgeon at Spire Leeds Hospital and one of the world’s most experienced liver surgeons who has a national and international reputation for taking on the most complex liver surgery cases. Ivan’s four tumours were too large for surgery and he was given chemo to shrink them. He underwent his first liver resection surgery under the care of Professor Lodge in August 2014, which was followed by more chemo. Cancer returned, and he had two more operations in the following years to remove more tumours.

Last year a routine scan at Spire Leeds Hospital showed a new secondary tumour located in a difficult position, made worse by the fact that previous operations had involved removing large portions of his liver along with the associated major blood vessels. This was to prove a challenge for his next surgery.

Ivan underwent his fourth liver resection in January 2018 which involved a ‘world-first’ in liver surgery.

Professor Lodge described the procedure, “This is a brand-new liver surgery operation, truly a world-first. During Ivan’s three previous operations I had to remove major blood vessels called hepatic veins. The new tumour was involving all of the remaining hepatic veins. These major veins drain blood out of the liver and are essential for survival. I did not think that the situation was operable initially, but I saw that Ivan had grown a new vein in the part of the liver that had regenerated following the previous liver resection operations.

“Things went well so we were able to remove the tumour successfully along with the major hepatic veins, leaving Ivan’s liver surviving on only the new vein. If he had not grown a new vein then I would not have been able to do the surgery. This is a new avenue for developing new liver operations. There is still a lot we don’t know about how the liver regenerates after liver surgery; Ivan’s case demonstrates how we must be more imaginative and strive to improve outcomes as much as we can.”

Professor Lodge added, “This was very high-risk and extremely complicated liver surgery and one of the most difficult that I have ever had to do. Spire Leeds Hospital is one of only a very few private hospitals in the UK to have the necessary facilities for this type of complex surgery. Part of my work at Spire is to offer patients a second opinion when they have been turned down for liver surgery elsewhere. Obviously, there are many patients who I sadly cannot help but we have had some remarkable successes over the years.

“Without surgery, Ivan would have been faced with having only a few months to live. I think that chemotherapy may have given him a few extra months but that’s all. It’s still early days but I’m very pleased with Ivan’s progress. We will be keeping a close eye on him but I’m hopeful that he will continue to do well.” he added.

Ivan said, “I woke up after surgery and Professor Lodge told me he had been able to remove the tumour. That was fantastic to hear! Now I’m back at work and looking forward to the future with my family. Nobody knows what’s going to happen in the future but I feel very lucky. There could have been a very different outcome!”

Ivan returned to Spire Leeds Hospital in December 2018 to have his portacath removed. His last scan in October showed he was clear of cancer. He will continue to return to Spire for scans every three months.