When Jason Clough set out on his motorbike to arrange a fundraiser for the Yorkshire Air ambulance, little did he know he would himself be needing their services that same day.

On route to locate stopping points for a west to east coast ride for bikers, Jason was involved in a serious traffic accident near Harrogate in 2019 which would change his life.

Two trauma surgeons from Harrogate, who were passing by, came to his aid just after the accident. They called the Yorkshire Air Ambulance as Jason needed immediate treatment and he was airlifted to the LGI Major Trauma Centre. 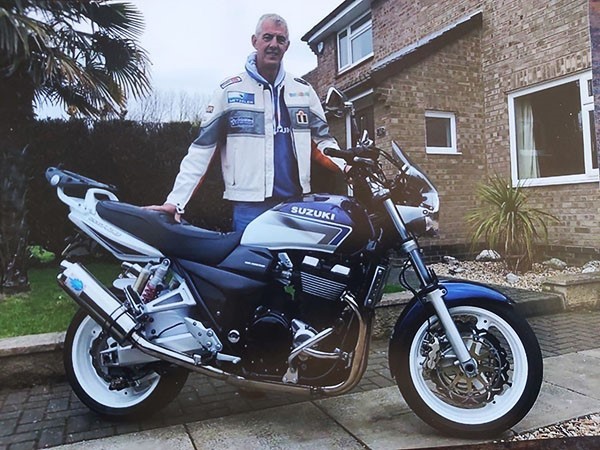 Jason was semi-conscious at the time but was placed in an induced coma for several days during which he had a series of life-saving operations. He required two laparotomies to stem the heavy bleeding and remove damaged bowel. He was too unwell at this first operation for the bowel to be immediately re-joined. As is common in unstable patients with major blood loss such as Jason, his abdominal wound was left open for a day or two, prior to a scheduled ‘relook’ operation to re-join the bowel when he had improved. This went well.

Eleven months later he developed three painful incisional hernias as a result of the emergency surgery and he was able to get a consultation at Spire Leeds Hospital where he underwent incisional hernia repair in October 2020 under the care of Mr Ian Botterill, consultant colorectal surgeon at Spire. Then in April 2021 he had a further operation to remove hernia mesh in the groin area – from a historic surgery, that had become infected from the emergency laparotomy at the time of the accident.

Mr Botterill said the final procedure had presented a few challenges. “It is very unusual to see this type of groin hernia mesh get infected from a previous keyhole inguinal hernia repair so many years after it was originally inserted. I haven't encountered such a case despite having a practice in complex hernia repair. There's been a lot of media coverage about the use of synthetic mesh in recent years, though admittedly most of the adverse publicity relates to its use in female pelvic organ prolapse surgery. While synthetic, ie man-made meshes for abdominal wall hernias can become infected and need removal, it's really not that common to have to undertake such surgery.”

Jason is now recovering and hopes to get back to normal activities soon. “That day of the accident changed my life in a split second. It’s now six weeks since the last surgery and I’m building my strength back slowly and I still cannot do simple daily tasks without feeling wiped out. My family and friends have been fantastic helping me with everything that needs to get done. My work is very physically demanding and I’m not sure when I will be able to return to that.”

He recently started riding a motorbike once again – and is still planning on raising funds for the Yorkshire Air Ambulance that helped save his life.

Jason said, “I’m hoping to organise a local motorcycle ride to raise funds for Yorkshire Air Ambulance. I want to give something back and help to raise awareness of the amazing work that they do. Ideally, I would like to do annual fundraisers.

“Yorkshire Air Ambulance saved my life, and I cannot thank those guys enough. I would also like to say a huge thank you to The Leeds Major Trauma Centre Team and Mr Botterill for helping to get me back to health. It was impressive how efficiently the Spire team dealt with my admission, my in-hospital care and my post-operative care despite all the challenges of looking after patients in a pandemic. Nothing was too much trouble for the team looking after me.

“It’s been a long journey of recovery since the accident in 2019 and finally I’m looking forward to getting on with my life.”