When the pain in his shoulder became so severe he was unable to lift his arms above his head, Keith Dibb feared his cricket umpiring days might be over.

After 26 years umpiring, Keith, 86, who has a lifelong passion for the sport, knows it’s vital for every cricket umpire to raise their arms to communicate a wide range of signals to the scorers.

Some batsmen might have been pleased, as Keith was unable to signal an ‘out’ - the one that most batsmen dread. As soon as the umpire makes this signal the batsman has to go. However, after a long run – clocking up 71 years of cricket experience, Keith is most definitely not signalling ‘bye’ and clearly, he is ‘not out’. 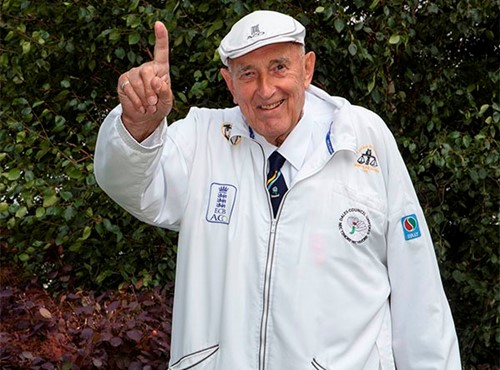 “I wasn’t ready to hang up my white coat just yet, but I got to the stage where it looked like I was stumped. Umpires need to use a range of arm signals to communicate scores. It was extremely difficult to signal a ‘six’ which involves raising both arms straight above the head. The tendons in both shoulders had deteriorated with age-related wear and tear and it was extremely painful and also affected my sleep,” said Keith, who won the Dales Council League’s Umpire of the Year twice in 2003 and 2005 and was made a life member of the same League in 2010 for his services to umpiring.

Today, following reverse total shoulder replacement surgery at Spire Leeds Hospital, Keith, a widower and grandfather of four who lives in Leeds, is able to return to the game.

The problem started three years ago and gradually worsened. Keith’s GP referred him to Mr Roger Hackney, consultant orthopaedic surgeon at Spire as an NHS patient.

“Mr Hackney performed surgery on a fractured humerus a few years ago for my late wife, Margaret, and when we attended the consultation, he remembered us straight away. Mr Hackney found the tendons on both shoulders were damaged, but we decided to do the left shoulder first as that was the most painful,” said Keith, who worked as a UK sales manager in the textile industry before his retirement.

Keith underwent a total reverse shoulder replacement in January 2019. The operation takes just under an hour, usually with a one to two-night stay in the Hospital. It was followed by a physiotherapy treatment programme at Spire.

Mr Hackney said “This surgical procedure is not so well known among GP’s or the general public. A Total Shoulder Reversal shifts the centre of rotation back towards the normal position and enables the deltoid muscle to act more efficiently. A French orthopaedic surgeon, Professor Paul Grammont, realised that in order to restore function to a rotator cuff deficient shoulder, the centre of rotation of the shoulder joint needed to be shifted. So he designed this method which reverses the mechanics of a standard shoulder replacement, moving the ball to the socket side and the socket to the ball, hence reverse total shoulder replacement. His design has been further developed and the procedure is now being used more and more frequently with excellent results. In Keith’s case, he wanted more movement than most patients can achieve. His outcome has enabled remarkably good movement, with no pain. Most importantly for him he can signal a six!”

Two days after the operation Keith was able to return home and was delighted that he could raise his arm again without pain. “Spire is like a five-star hotel. The staff really looked after me!” said Keith, who has been involved with fundraising activities for Headingley Mecca of Yorkshire CCC for the Dickie Bird Foundation for underprivileged children in sport.

Keith added, “I feel very lucky! I thought it might be the end of my umpiring days, but Mr Hackney at Spire gave me a new shoulder and put me back together again. I’m in a very fortunate position, being able to continue doing something I love and it’s great to be involved in cricket once again. I don’t intend to give it up anytime soon.”