Life has been transformed for a Leeds man after spinal surgery ended six years of chronic arm pain and weakness.  Following the procedure, which was performed through the front of the neck, he felt the relief within a day and now, just three months after surgery, is pain free, has his life back and has been able to return to work. 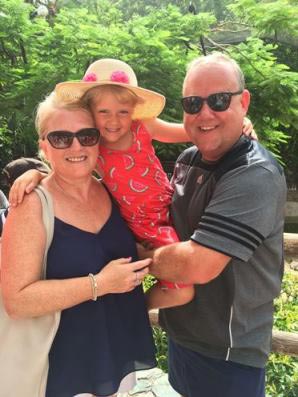 The problem first started over six years ago for George Hill, 54, an engineering manager for medical giant, Johnson & Johnson. He suffered from shooting pains, pins and needles in his right arm and hand and he started to drop objects. The pain steadily progressed and started to affect his life, causing him to give up his leisure pursuits including golf and fishing.

“The pain was quite restrictive,” said George, who is married with two children and two grandchildren. “I’ve always enjoyed being active and I was so limited with what I could do. Due to the pain and discomfort I felt 20 years older than I actually was. I controlled the pain with daily doses of medication.”

Then one morning George woke up to discover his legs felt like lead weights. He went to see his GP. He also tried physiotherapy, but it did not provide a long-term solution and he decided to find out what was causing it. George made an appointment with Mr Greg Rudol, a consultant orthopaedic spinal surgeon at Spire Leeds Hospital.

George said, “Mr Rudol was fantastic. He listened carefully to my symptoms and carried out a series of tests before diagnosing cervical radiculopathy due to disk prolapse. He said that this was caused by nerve root pressure in my neck. Mr Rudol explained everything in detail and advised that surgery would be my best option.”

George underwent minimally invasive anterior cervical discectomy and fusion (ACDF) surgery to the spine in February 2018. It was performed through the front of the neck.

Mr Rudol describes the surgical procedure he performed, which took just over one hour, “Surgery addresses the front part of the neck-related spine. This is where the shock absorbing disk is sitting between two consecutive spinal bones. When the disk becomes ‘worn’ (degenerate) it may shift (prolapse) and press against the nerve root exiting from the spine at that level. Surgery aims to open space for the affected nerve and in this way help to deal with the pain. The operation is carried out through the front of the neck. The majority of the offending cartilage disk is removed and replaced with an implant which enables to maintain the spinal shape and its integrity.”

Commenting after the surgery, George said, “I was nervous about having the procedure. However, I felt the benefits much quicker than I expected. A day after surgery I felt a difference and four days later it brought about a complete change of lifestyle. I felt ten years younger. The results were one hundred percent better than I expected. I thought I would be hobbling about in pain, which was not the case. Today, all the symptoms and the pain have gone and my posture is even improved. I used to walk looking down at the floor and now, my wife tells me, I’m actually standing up straight.

Mr Rudol added, “This is one of the most common spinal operations performed and it performed ‘miracles’ for this patient’s pain control.”

George’s recovery was helped with a course of physiotherapy at Spire Leeds Hospital. He was soon able to return to work and is now experiencing an active life once again. He is delighted to be back on the golf course and is enjoying playing with his grandkids once again.

He added, “Mr Rudol is an exceptional surgeon. He kept myself and my wife informed every step of the way and explained what I should expect ahead of surgery. He advised me about the risks and suggested I take a week to think about it before making a decision. Mr Rudol and the nursing staff at Spire made the whole experience fantastic from start to finish.”