Alex and his wife Hannah feared his surgery, which was scheduled under the NHS in June 2018, would coincide with the arrival of the new baby. However, they decided that Alex would have the surgery privately after discovering he was covered by his wife’s health insurance at work, which meant he could have the procedure done much sooner. 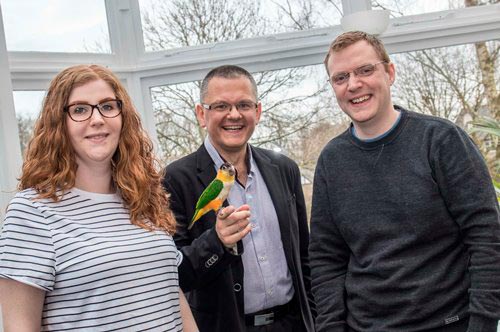 “We wanted to be ready for the baby and it was really important to get the surgery out of the way ahead of that time.”

The problem first started over two years ago for Alex, a technical operator for a confectionery company. “It came on suddenly, I was bent over at a right angle working on a piece of machinery and felt a jarring pain. Then a week later the pain worsened in my back and down my leg. It quickly progressed and became unbearable,” he said.

Alex had difficulty walking due to the pain, he was getting less than four hours sleep a night and was unable to drive or do anything which involved bending. He had to stop riding his beloved motorbike and his life was essentially put on hold.

“Doctors thought it was a muscular problem and I spent the next two years on strong pain killers and having physiotherapy. Then the bouts of pain increased in frequency and became more prolonged. I knew I needed to get to the root cause,” said Alex.

An emergency MRI revealed the problem was spinal rather than muscular and Alex needed to have a microdiscectomy. However, when he learned his surgery date involved a 23 week wait and clashed with the birth of their first baby, he looked into the alternatives and discovered he was covered to have the procedure done privately with the same surgeon, although the excess on the policy was a consideration.

Alex had another consultation straight away in January 2018 with Mr Greg Rudol, consultant orthopaedic spinal surgeon at Spire Leeds Hospital, who explained everything in detail. Alex underwent a microdiscectomy on 26th January at Spire and was able to return home the following day.

Mr Rudol said, “Alex had been suffering from sciatica pain for a long time. He first came to see me in NHS. His pain looked to be caused by a piece of disk cartilage pressing against the nerve. Some patients opt not to have surgery but then pain control can be an issue and many become chronic and in permanent discomfort. We agreed on surgery as the best long-term solution however, due to my long waiting list and some winter cancellations his operation date became even more vague. He then realized he had insurance and could be treated at shorter notice at Spire.

The operation, which took around 80 minutes, involved removal of the offending disk fragment to relieve pressure on the nerve. Mr Rudol said, “Alex felt improvement in his leg pain straight away which certainly brought a big grin on his face as soon as he woke up! The good pain relief has remained and this is the result I would expect in 80 percent of patients undergoing this procedure.”

Mr Rudol added, “This is one of the most common spinal operations performed and it performed ‘miracles’ for his pain control.”

Alex, who is passionate about parrots and used to have an aviary with more than 200 birds, is now enjoying life with his wife and new baby. After 6 weeks of recuperation returned to work at the end of April. He said “I am extremely grateful to Mr Rudol for helping me to get my life back on track. If I need surgery for anything else in the future I will certainly be straight back to Spire.”