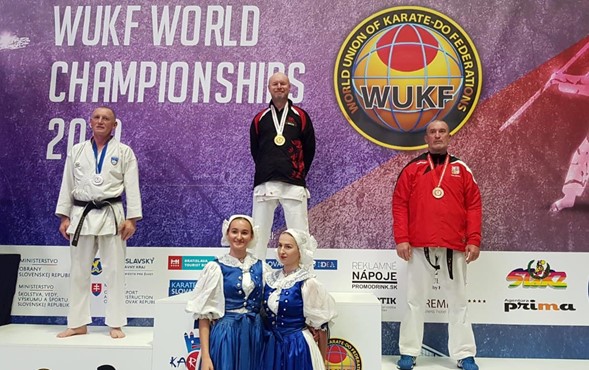 Two operations on a damaged knee could have put a stop Welsh karate black belt Gareth Rowe competing at the top level after almost 30 years in the sport.

But as he was presented with the Gold Medal at the WUKF World Championships in Bratislava, 52-year-old Gareth was looking to the future and now has eyes on more international titles.

Dad-of-two Gareth, a pharmacist who lives in Bridgend with wife Cathie, was first troubled by the injury after competing in the European Championships in 2014.

Things deteriorated until he was forced to give up training altogether and feared his almost life-long love of karate was coming to an end.

But two operations to fix the tendons and reduce the swelling in his right patella saw him back on his feet and back in the competitive arena!

Gareth, whose sons Alex and Ben are both 1st Dan black belts, co-runs a karate club in Pencoed. He said: “As a so-called ‘mature athlete’ is not uncommon to be looked upon as ‘slightly foolish’ for wanting to compete in something that is so physical and where the contact sometimes causes injury.

“But karate has so many benefits – both physically and mentally – that I was determined I wouldn’t be forced out by injury.”

Gareth met with Consultant Orthopaedic Mr Rhidian Morgan-Jones at Spire Cardiff Hospital who explained that after non-operative treatment with physiotherapy and steroid injections had not helped, there were times when surgery was the best option.

He said: “Gareth’s knee needed some precision surgery – taking away damaged and inflamed tissue as well as removing a bony spur that had developed around the patella (kneecap). Once this was done there was no reason why he couldn’t return to sport.

“As long as the patient listens to their physiotherapist and undergoes the right rehabilitation after surgery, then age shouldn’t be the main factor. In Gareth’s case there is no reason he shouldn’t be involved in karate for many years to come.”

A member of the Karate Wales squad since 2013 Gareth had already competed in two World Championships and two previous European Championships before his victory in the 51 to 60 years category in Bratislava.

He said: “It was a great feeling to become a World Champion and even better were the number of people in the sport who went out of their way to congratulate me and pass on their best wishes.

“It has been a tough road to recovery but it was all worth it. Now I hope others suffering with similar injuries will see what I have done and be encouraged to seek medical advice for themselves.”