Data from the Society for Cardiothoracic Surgery in the UK and Ireland show that the in-hospital survival rate at Spire Southampton is consistently the highest in the UK – despite an older patient population with more co-morbidity and more complex operations than the UK average.

The NICOR (The National Institute for Cardiovasular Outcomes Research) undertakes an analysis of data from the National Adult Cardiac Surgery Audit and has completed a recent update for the period 1st April 2014 to 31st March 2017.

Spire Southampton is one of only two units nationally (there are 40 on the database) to have received letters of congratulation from NICOR and SCTS for achieving survival rates higher than expected for the latest 2014-2017 update. It was one of three units, with UHS, to receive a similar letter for the 2013-2016 outcome report and therefore the only unit in the UK to receive a positive outlier letter for both three year updates.

The surgical outcomes achieved are only possible because of the entire team effort at Spire. This involves all surgical grades, other medical disciplines (especially anaesthetic colleagues), allied medical and nursing staff, and the Spire Management Team.

The SCTS website (www.scts.org) has a patient portal for the public to review hospital and surgeon-specific

‘outcome’ data. Survival rates show the percentage of patients discharged alive from the hospital where they had their operation. Some operations, such as transplants, and all emergencies (e.g. aortic dissections) are excluded, but otherwise all elective and in-house urgent cases are included. Survival rates are ‘Risk Adjusted’ as some patients are more unwell and have more complex operative procedures. To make fair comparisons between hospitals and individual surgeons, complex mathematical calculations are made to show what survival would have been had all patients been similar and all operations of ‘average’ difficulty. These calculations are based on an adaptation of the EuroSCORE model of risk adjustment. More details can be found on www.scts.org.

Spire Southampton has the lowest proportion of CABG and highest proportion of complex mitral procedures. Some risk factors such as age, gender and other medical problems can affect the outcome of heart surgery. An elderly patient with co-morbidities undergoing a complex operation is considered differently to a younger patient having a straightforward operation. 10% more patients at Spire Southampton are over the age of 75 than the national average and Spire also has a greater than average female patient population. 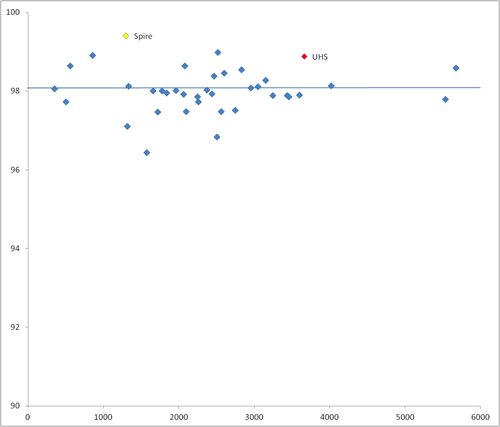 The above graph shows the number of cases and survival data for 2014-2017 for all UK units on a scale of 90% to 100% - with the national average survival of 98.04% demonstrated by the blue line. No unit was statistically a ‘negative’ outlier based on the model of risk adjustment employed, this is a credit to the standard of cardiac surgery in the UK. The graph also shows Spire Southampton, in yellow, has the highest survival rate in the UK of 99.57%.