Keith Wiseman is a man who needs to be heard!

As Head of Match Day Security at Aston Villa FC, Keith spends his time keeping everyone safe when the Villa are in action. Then when he gets time to relax, he performs at venues around the West Midlands with the band Black Tulip.

So when 55-year-old Keith developed an acid reflux condition that left him hardly able to speak, things became ‘difficult’ – to say the least.

“Every time I tried to speak I ended up coughing. Meetings were a nightmare and performing with the band was impossible,” he explained. “It started with me feeling bloated after every meal but as it developed it was the urge to cough that was causing the most problems. It really was having a bad effect on my life.”

Keith met with Dr Mark Cox, a Consultant Gastroenterologist at Spire Little Aston Hospital in Sutton Coldfield who explained that acid reflux was caused by stomach acid leaking into the oesophagus. Normally the muscles around the oesophagus would contract and so block the leak. However, in some cases, these muscles become weakened and unable to seal the flow completely.

“It is a fairly common complaint and often results in heartburn, indigestion, chest pain, coughs, a sore throat and voice changes. Most people can control it with medicine but others do need medical intervention,” said Dr Cox.

“In Keith’s case, I thought the best treatment would be to use Stretta, a procedure that would strengthen the muscles and help improve their performance.”

Stretta therapy involves an endoscope being passed down the throat all the way to the muscle of the lower oesophageal sphincter and gastric cardia. Once in place, we deliver radiofrequency energy which causes the sphincter to become stronger, thicker and less pliable, preventing acid refluxing from the stomach back into the oesophagus.

“In simple terms, it’s the surgical equivalent of taking the muscles to the gym! We don’t need to make any incisions and the patient usually leaves hospital a few hours after it is all done,” said Dr Cox.

And as for Keith, the coughing has disappeared and other symptoms are improving on a daily basis.

Keith explained: “It was a simple operation and the results have been great. I’m afraid coronavirus and the age of our band may signal an end to our public performances but we’ll be meeting up for some ‘reunion’ sessions as soon as we’re allowed.

“Work at Aston Villa has also been affected by the pandemic but having my voice back has certainly made it easier to plan match-day strategies as we prepare for the fans coming back through the turnstiles.” 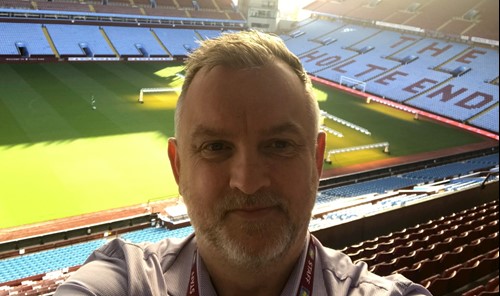 Pictured: Keith at the Villa, preparing to welcome back fans!

If you struggle with acid reflux, why not call and book an initial consultation where you can understand your treatment options.