When Neil Shuttleworth, a retired printing specialist from Huddersfield, had total ankle replacement surgery he told his surgeon at Spire Leeds Hospital his first ‘mission’ after surgery was to walk comfortably down the famous Promenade de la Croisette in Cannes eating ice cream with his wife Christine. 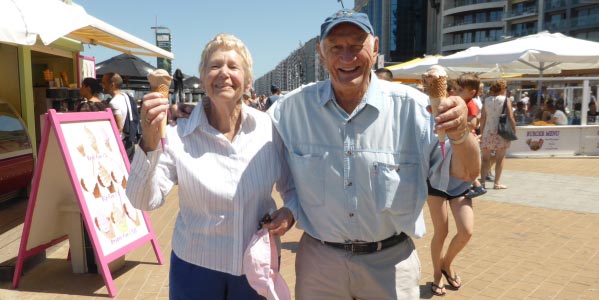 Neil, 81, underwent a Rebalance Total Ankle Replacement (Zimmer-Biomet) which is one of the newest replacements available. It uses a high-density E-Poly bearing (a type of polyethylene with added vitamin E) which bullet proof vests are made from. It is the only ankle replacement at present using E-poly for the bearing which has 80% better wear characteristics than conventional polyethylene making it more durable which should help the lifetime of the implant.

Professor Nick Harris, consultant orthopaedic and trauma surgeon who performed the surgery at Spire Leeds Hospital, said, “The use of E-poly with its better wear characteristics is an exciting development and will hopefully mean ankle replacements will last longer.  There is an 80% to 90% chance at present an ankle replacement will last for at least ten to fifteen years. The use of E-poly may improve this further.”

Before surgery Neil could not walk more than a few hundred yards as the pain in his ankle was so severe, which was difficult as he had always lived an active life which involved physical work and playing sport, including running and cycling across UK and Europe.

The problem started when he was on holiday in Cyprus several years ago. “I was planning to swim around Aphrodite’s Rock as it promises ‘eternal youth’. We parked in an empty car park which was the size of a football pitch and I stepped out of the car into the only pot hole anywhere near and tore ligaments,” said Neil, a grandfather of seven and great grandfather of one.

The pain worsened steadily over the next few years until it became agonizing due to bone-on-bone contact. He managed the pain, to a point, with medication. “I knew I had to do something about it. My condition had become intolerable, I had virtually no cartilage and if I went over on my ankle the pain was agonizing,” he said.

Mr Harris explained the options which involved either an ankle fusion or total ankle replacement. Of the 30,000 cases of ankle osteoarthritis seen by hospital specialists every year, only about 1,200 of them will undergo ankle replacement surgery as fusion surgery is much more commonly performed. *

Ankle replacement offers a quicker recovery than fusion with patients being able to fully weight bear after two weeks. Ankle fusion remains the most reliable treatment but has a longer recovery time of around 14 weeks. Neil chose a total ankle replacement and self-funded the surgery in January 2018. He used crutches and wore a special walker boot for the next six weeks. This was followed by a strict six-week physiotherapy regime, firstly at Spire and later closer to home. Neil is now able to walk a couple of miles without any problem and uses a treadmill on incline setting to further build his fitness levels.

Mr Harris said, “The results of Neil’s surgery are excellent and there is at least an 80%-90% chance the ankle replacement will survive for at least 10 to 15 years.”

Neil said, “When my surgeon asked me what I was expecting to achieve from the operation, I said I wasn't expecting to run a marathon, but I wanted to be the best I could be for my age. I said I would like to walk along a promenade hand-in-hand with my wife Christine eating an ice cream but without the pain I had lived with for far too long. The photo we had taken of us doing this was titled ‘mission achieved’. I sent a copy to my surgeon. I’m very happy with the results and looking forward to a long, active and pain-free retirement.”

And Neil has now topped this achievement. In celebration of his newly restored mobility. As an ex-RAF man and aeroplane enthusiast he has now fulfilled his long-anticipated dream to fly in a Spitfire. 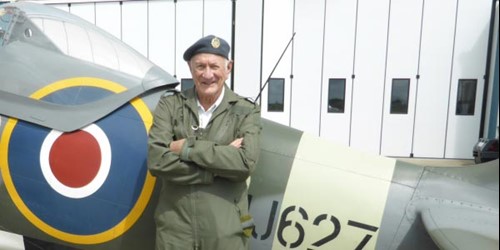 Neil said, “I decided to treat myself to a flight in a Spitfire. It flies from Biggin Hill in Kent, which was one of the primary defenders of London in the Battle of Britain. It was a never-to-be-forgotten experience as I took the controls for quite a while before the pilot took over again and performed the famous ‘victory roll’. It was exhilarating!”