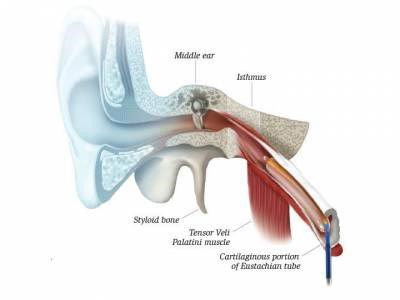 Approximately 1% of the population suffer with pressure symptoms in their ears. For some people this is only troublesome when flying, due to an inability to equalise the pressures within their middle ears as the flight descends. However, for others it can cause problems at other times, particularly after a cold or sinusitis, when it can be associated with hearing problems, ear popping, crackling or tinnitus.

Most people with this set of symptoms will receive treatment with steroid drops or sprays or will try over-the-counter ear inflation devices. If these treatments prove to be unsuccessful, then the next step might be to consider surgical insertion of ventilation tubes, often referred to as grommets. However, surgery can cause other problems such as changes to the eardrum, ear pain or tinnitus, and the symptoms may return when the grommets fall out.

More recently a novel treatment has been introduced which involves gently stretching the opening the Eustachian tube using a minimally invasive approach that can be conducted as a short day-case procedure. This procedure, known as “Eustachian Tube Balloon Dilatation,” has been shown to be extremely safe and effective. Clinical studies in the USA and in Europe have demonstrated high rates of technical success along with a very low incidence of adverse events. The procedure is carried out via the nose using endoscopes and a specially designed instrument to access the Eustachian tube without the need for any incision or cut.