A piano playing surgeon is helping to rescue the careers of leading musicians.

As a result one of Edwin Prashanth Jesudason's patients has recommended him to the British Association of Performing Arts Medicine (BAPAM).

Pianist Lesley Howell, of Pantymwyn, near Mold, who has severe arthritis in her fingers, feared she would never play again.

She was so pleased with Mr Jesudason's specialist approach that she contacted BAPAM to recommend him for inclusion in its directory.

The directory is a much valued reference source used by top musicians across the UK when seeking treatment for ailments with the potential to seriously hinder their playing and performing abilities.

Mr Jesudason, who works at the Spire Yale Hospital in Wrexham has a particular affinity for musicians, having been taught to play the piano by Dennis Rattle, father of world famous British conductor, Sir Simon Rattle, who was himself an accomplished pianist and jazz virtuoso.

He considered becoming a professional pianist himself until his medical studies diverted him away from musical ambitions.

Mr Jesudason said: “I studied piano until my late teens and achieved quite a high level. I entered competitions and even won a few, but then I came to a fork in my career road.

"It was a difficult choice for me – I loved my music, but I also really wanted to become a doctor which would mean devoting a lot more time to my studies. In the end medicine won, but I have no regrets about it. I still love my music and play whenever I can.”

In his spare time, he also enjoys playing the guitar, sitar and didgeridoo.

He feels honoured that Lesley has put his name forward to BAPAM, a registered charity which offers information and medical advice to people working in and studying the performing arts.

She first met Mr Jesudason when she went to him as a patient at Spire Abergele Consulting Rooms, Abergele.

Lesley explained: “My finger joints have been gradually deteriorating for some years now and it has become increasingly painful for me to play. I had seen other doctors but they had not given me much hope. I have played all my life and music is one of my greatest loves.”

Having been immediately impressed by Mr Jesudason’s clear understanding of her dilemma, she said: “I could tell straight away that he knew exactly what I was talking about, the difficult choices I was facing and the array of emotions running through my head.

"While it is important for me to eradicate the pain, after a lifetime’s musicianship, I want to continue playing for as long as possible. Mr Jesudason understood this and had a natural affinity with the musician’s viewpoint in the way he assessed my situation. It was so good to be able to talk to someone on the same wavelength as myself who also had the medical knowledge to be able to help.

“That’s why I contacted the British Association of Performing Arts Medicine about him."

Although Lesley is still in the early stages of her treatment, she now feels she will no longer have to shut the lid down on her much-loved piano for good.

She said: “I feel there are now more options open to me, he’s very knowledgeable about musicians’ needs and explains in great detail the pros and cons of different treatment regimes, the various possibilities and which ones are most likely to maintain my playing ability for the longest.

“That approach in turn imparts me with greater knowledge and a feeling of being more in control, more free and able to make some of the key decisions on which way I want my treatment to go.”

Mr Jesudason is an expert in hand, wrist and elbow conditions, soft tissue injuries and the associated surgery.

In 2011 he completed the British Society for Surgery of the Hand, University of Manchester Diploma in Hand surgery, and went on to become one of the first consultant hand surgeons to be appointed in Wales with this esteemed qualification.

He has a specific interest in upper limb disorders affecting musicians and has treated a number of instrumentalists for conditions varying from fractures, tendon and ligament disorders, to arthritis, carpal tunnel syndrome and problems affecting the nerves of the hand and wrist.

He believes his background as a classically trained pianist, coupled with being a keen guitarist, increases his understanding of the specific demands placed on a pianist's hands, wrists and elbow joints, and of other upper limb problems common to both professional musicians and accomplished amateurs.

Lesley, now in her sixties, studied music as a child and went on to music college at Cardiff. Her piano playing remains an important part of her life, both at home but also on her many travels with her Baptist minister husband, Russ.

He was based in the South Wales valleys for five years, before moving to Chester, where he served with Hoole Baptist Church for more than a decade. Today Russ and Lesley offer counselling sessions for church leaders in the UK and abroad. They regularly visit church congregations in other parts of Europe, including the Kecskemét area of southern Hungary where they have made many friends.

Lesley said: “Even after playing all my life I still find music extremely therapeutic. I was desperately sad at the thought of having to one day give up the piano. But hopefully with Mr Jesudason’s help that day can be put off for many years yet.” 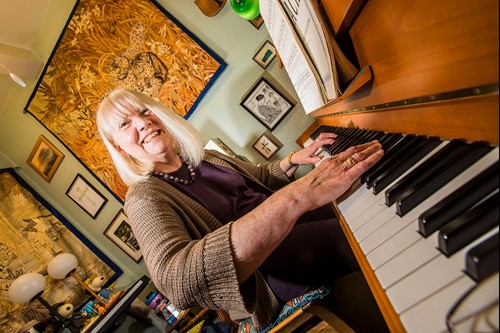