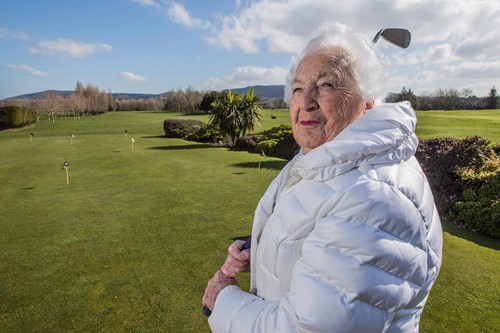 An 85-year-old grandmother who still enjoys a twice-weekly round of golf is poised for a summer comeback after a double knee replacement.

When Jane Bishop was told she needed an operation to replace her left knee, her only concern was how long she would have to stay away from her favourite game.

The grandmother-of-four, who has decades of club-level competition experience, underwent the surgery in November 2016 under the care of consultant orthopaedic surgeon Mr John Whittaker at the private Spire Yale Hospital in Wrexham. She was just days from returning to the golf course when disaster struck and she tore the cartilage in her right knee.

The former legal secretary, who is due to move to Rhuddlan in the summer, initially requested keyhole surgery to repair the affected tissue but was told a second knee replacement was the only permanent solution – this time on her right knee.

After enduring a second knee replacement operation in little over a year, the pensioner was amazed at how quickly she recovered and is finally just weeks away from picking up her clubs again – for good.

“It’s really important for me to keep active,” said Jane, who has won several Open competitions and whose all-time best handicap is 16.

“When the pain stopped the first time around I felt on top of the world. I was so disappointed when the other knee went. I told the golf club I was coming back and then the next week my knee had gone again.

“I’m just so thankful to Mr Whittaker and his team for taking such good care of me and putting me on the right road to recovery.

“It’s been over a year since I was able to play. Since I turned 80 I’ve probably played twice a week but before that I was playing four times a week and when I was 75 I played five times a week. It’s the only game I’ve ever been particularly good at, apart from bridge.

“I cannot thank Mr Whittaker enough for what he’s done. It’s certainly in my mind to get back to the golf course in the not too distant future.”

Jane, who lives in Swansea but is temporarily staying with her sister in Trelawnyd as she recovers, first noticed a problem with her left knee towards the end of 2016. The joint would occasionally give way due to arthritis and didn’t seem up to the same level of activity.

“I was rather nervous because I’m getting older and I didn’t want it to happen when I was out when someone would have to call an ambulance,” she said.

“I decided to go and see Mr Whittaker at Spire Yale. The x-rays showed my left knee had deteriorated quite a lot so I decided to have the knee replacement.”

Mr Whittaker, who qualified in 1995 and completed his initial surgical training in Liverpool, Chester and Shrewsbury before achieving the Membership of the Royal College of Surgeons in 1999, has extensive experience of treating complex hip and knee problems. He works at both Spire Yale Hospital and Spire Abergele Consulting Rooms.

The 46-year-old has undertaken several fellowships at international centres of excellence's including the Princess Elizabeth Orthopaedic Centre in Exeter and London Health Sciences Centre in Canada.

He explained it was not uncommon for patients to require a second knee replacement after regaining the mobility following their first knee and no longer feeling pain.

“People focus on the area of their body which hurts most and once that has been treated and increase their activities they discover there are other areas of pain which they hadn’t been aware of earlier,” he said.

“If this pain is enough to restrict their movement and activity levels then of course they will want to resolve it. In this case, Jane unfortunately tore the cartilage in her right knee shortly after the first operation and it was a case of either cope with the pain or opt for a second knee replacement.”

The former legal secretary, who has a 53-year-old son and four grandchildren aged from three to 26, was busy preparing her comeback to her local club, Langland Bay Golf Club near Swansea, when injury struck the right knee.

“It just gave up one day. I’d gone to the bathroom and felt a tremendous searing pain. Later I was told I’d torn the cartilage,” she said.

Thanks to her speedy recovery, Jane is just weeks from being able to resume her normal level of activity and enjoy a much-longed for 18 holes.

“Thankfully, Jane was in really good health otherwise and has looked after herself. The muscles were strong from physio and exercise which helped her recover,” said Mr Whittaker.

“I was amazed at the speed of her recovery following the second operation. She brought forward her appointment three weeks early and walked in with no crutches or walking aids and was moving absolutely fine. She told me she was travelling back to South Wales so she could pack boxes and get ready for the move to North Wales."

Jane praised Mr Whittaker’s approachable nature and said his reassurance throughout both procedures and between had given her the confidence to get back to living her life to the full.

She said: “I cannot thank Mr Whittaker enough. He’s very approachable and helpfully explained that they wouldn’t be putting in the knee of a 21-year-old in an 85-year-old body!”

“I reckon by the middle of summer I’ll be swinging a club again. With golf, you’re surrounded by lovely scenery. I’ve really missed it.” 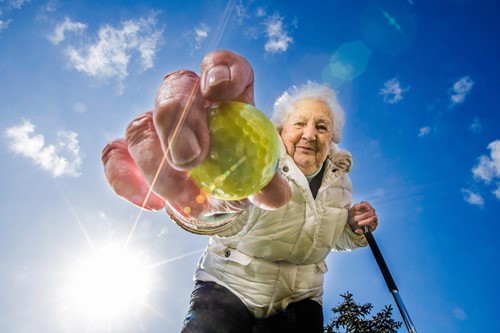 To book a consultation with Mr Whittaker at Spire Abergele Consulting Rooms or Spire Yale Hospital, Wrexham call us today.