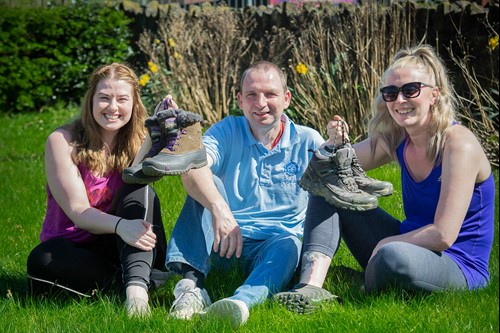 Kind-hearted hospital staff are going up in the world as part of a determined campaign to help a life-saving homeless hostel in Wrexham.

Among them will be operating department practitioner Catrin Stace-Jones and  anaesthetist Lindsey Edge-Smith, who work at the Spire Yale Hospital in Wrexham.

They will be climbing 1,085 metres to the top of Wales’s highest mountain, Snowdon, and are encouraging as many of their work colleagues as possible to join them. They are also organising a raffle.

Funds raised via the sponsored climb will go to replenish vital supplies at T Nos homeless shelter in Wrexham which is so busy that nearly every night it has to turn away desperate people with nowhere else to sleep.

Andrew Edwards, who manages the 16-bed shelter in Holt Road, said they are immensely grateful  to Catrin, Lindsey and their workmates at the private Spire Yale Hospital for coming up with a dynamic action plan to help.

Tŷ Nos provides more than 5,000 overnight stays a year and is a vital resource for struggling men and women of all ages.

Andrew said: “Catrin first started supporting the shelter a couple of years ago when she organised a collection of food, toiletries and other much needed products for us  to distribute to our homeless community over Christmas.

“Since then she has continued to support us in any way she can. She often pops in to see how we’re doing and asks what else she can do to help.”

It was during one such impromptu visit that Catrin came up with the idea for the Snowdon trek.

She said: “I know the shelter needs more beds, along with other important supplies such as pillows, bedding, toiletries and personal hygiene products. I thought if we could organise a major sponsored event we might raise enough to buy some larger items, particularly the extra beds.”

Catrin, 31, who grew up in Coedpoeth but now lives with her husband in Borras, believes that if groups of local people get together to undertake just one fundraising activity so much more could be done to prevent people having to sleep on the streets at night.

She said: “It’s hard for one person individually to make a big difference but if we got together in groups and all did our bit, it could have a major impact and give people in dire need a taste of a the home comforts most of us take for granted.

“This shelter always receives a boost in support over Christmas when people become increasingly aware of the needs of those without a home to go to.  But the fact is they need somewhere safe to sleep every night of the year - winter, spring, summer and autumn - and the shelter is currently bursting at the seams.”

Andrew confirmed that Tŷ Nos was full every night.

He said: “We open from 8pm to 8am and there is never a bed spare. It is heart-wrenching when someone turns up desperate for a place to rest and we have to turn them away because we are full to capacity.

“Our shelter has been running for ten years now during which time it has certainly saved lives. People forced to sleep on the street are that much more vulnerable to long-term health issues and in the recent winter weather we’ve experienced the dangers are multiplied to the point that fatalities can easily occur.”

Catrin has set a fundraising target of £1,000 for the Snowdon walk on June 9.

She said: “That’s the goal I have in my head but if we can raise more, then fantastic. All proceeds will go direct to the shelter.

“When I’ve run other fundraisers our colleagues here at Yale have been hugely supportive.

“At Christmas I suggested that, instead of doing a Secret Santa gift exchange among staff, we all bring in food items and other essentials to donate to the hostel. I was flabbergasted when we collected about 15 boxes full. Everyone here was so generous. Now the idea for the walk has met with equal enthusiasm.”

Catrin, a theatre scrub nurse, is especially thankful to friend Lindsey Edge-Smith, for her unstinting support.

She said: “When I first suggested we rally together to help Andy and the guys at Ty Nos, Lindsey completely embraced the idea and helped me no end with organising projects, carrying stuff to the shelter, getting word out to our colleagues and friends, and generally summoning support. She deserves as much credit as anyone for the success of our efforts so far.”

Lindsey, of Wrexham, is a team leader in the Spire Yale Hospital anaesthetics department. She and Catrin are also urging family members and friends outside work to put their best feet forward up Snowdon.

About 11 staff have already signed up for the energy-sapping event, along with some of the regular volunteers from Tŷ Nos shelter.

She said: “Unfortunately he has dodgy knees after years of playing football, so he can’t do the climb, but he’ll certainly be there at the bottom with lots of bottles of water to hand out to us as we come back down.

“We welcome people to come along and cheer us on or meet us with a congratulatory smile after the walk. And of course anyone who is not up to doing the walk can sponsor us or just donate to the worthy cause.”

She said: “Catrin and Lindsey are full of energy and initiative. They have achieved a lot towards helping the homeless community here in Wrexham. Everyone deserves a safe place to sleep at night and whatever we can do to ensure that happens is worth doing. This is an extremely important cause and I am pleased to see our Yale Hospital team rallying behind it.”