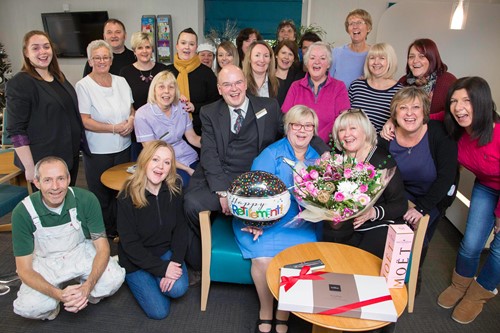 A nurse from Flintshire with a heart of gold was moved to tears when she bade an emotional farewell to colleagues at a private hospital after more than a quarter of a century working there.

Pam Crinson was one of the longest serving members of staff at the Spire Yale Hospital, in Wrexham, along with hospital director Sue Jones, and was given a bumper package of retirement gifts.

Though many colleagues were not working that shift they travelled in – some from many miles away – specially for a farewell presentation in the hospital reception foyer.

Close friend and fellow nurse Olwen Hope, was among those who turned up on her day off especially for the grand occasion.

She said such was the affection in which Pam was held that they collected one of the largest amounts ever to buy gifts for a person leaving.

Olwen, who has worked with Pam for 18 years, said: “Everyone loves Pam, she’s such a lovely person and the donations for her leaving gift just poured in. I have never known us to collect so much before for anyone.”

The result was a bumper package which included tickets for a murder mystery evening with dinner on board the magical Severn Valley Steam Railway, much to travel-loving Pam’s delight.

She also received a voucher for afternoon tea for two at a swish Chester restaurant and gift cards for a top department store. There was a bouquet of flowers, vintage champagne, luxury chocolates and a giant sized specially iced celebration cake was also in the mix. 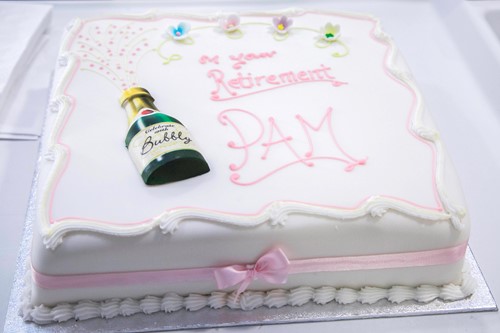 Although Pam, aged 60, from Broughton, was overcome with emotion it did not stop her from carrying on with her duties, dedicated as ever even on her last day. She took time away from the celebration gathering to remove the plaster cast from a patient’s leg.

“The patients must always come first,” said Pam, “Even on my last day I will be here for them as long as they need me.”

She worked for many years alongside top orthopaedic consultant Mr Patrick Laing, a highly regarded specialist in feet and ankle complaints.

He said: “Pam is simply wonderful. She is a fantastic organiser and definitely the boss in my clinic. She is a real professional who runs everything marvellously well and the patients just love her.

“I am sorry to see her go but we all wish her the very best for a long and enjoyable retirement.”

His words were echoed by Spire Yale hospital director Sue Jones, who said: “We all want to say a huge thank you to Pam for her tireless dedication and unstinting friendship over the years. The entire hospital will miss her terribly. She is an excellent nurse and a lovely, generous spirited character. We will all wish her lots of memorable adventures in her retirement.”

Fellow outpatient nurses Carolyn Ballamy, Jane Wallis and Outpatients sister Jackie Suter joined Olwen Hope in helping organise Pam’s leaving presentation. It is the second time in a few months they have teamed up to keep a secret from their friend after previously arranging an array of surprises for her 60th birthday which was marked with an unforgettable party at Dodleston Village Hall, near Chester.

Jane, who travelled in to work from Connah’s Quay, on her day off to be there for Pam’s official farewell, said: “I wouldn’t have missed it for the world. We are all great pals and often socialise together, so we still hope to be seeing quite a lot of Pam.”

Olwen added: “She has such great strength of character and is so kind. I can’t count the number of times she has stepped in to cover shifts for people over Christmas holidays or at times when they needed to be with their family, even though she has had many difficulties of her own over the years.”

Pam’s late husband, Paul, suffered multiple sclerosis and died two years ago. He was always proud of her nursing expertise and he also had many friends among the Spire Yale Hospital staff.

Pam said: “I have loved every minute of my time here and of course I will miss it terribly, but there are other things I need to do now and I’m immensely looking forward to my retirement years.”

Pam, who has visited Alaska, China and South Africa on holidays, is a big fan of travelling and particularly enjoys cruise ship vacations.

She said: “I have made a bucket list of things I want to do and places I want to go and top of the list is Australia. I’ve never been and I would absolutely love to spend some time there.”

She is also keen to devote more time to her family. Her father, John Lloyd, 88, lives in Dodleston, near Chester, and she also has two elderly aunts living locally.

Pam herself grew up in Dodleston. After training as a nurse she worked for several years as a sister in Basildon, Essex. As her husband’s illness progressed they decided to move from their then London base to north Wales to be nearer Pam’s family.

She said: “We settled back here and have made many good friends who have been a great support to me over the years, not least those I have made here at work.” 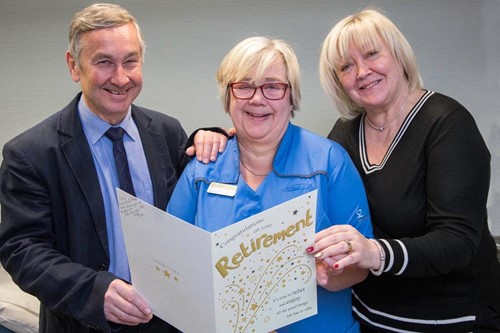