Hannah Blackburn had a hip replacement at Spire Leeds Hospital under the care of consultant orthopaedic surgeon, Mr Jon Conroy

Hannah Blackburn, 40, is a business development director for a private diagnostics company. Last summer Hannah noticed her leg would give way when walking. The pain in her left hip and leg worsened until she was in constant pain which started to impact her active lifestyle. 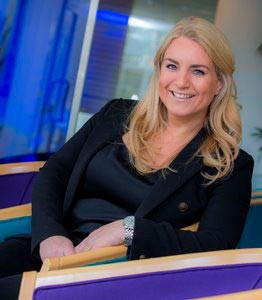 Hannah said, “The pain felt like a red hot poker running from my hip to my ankle. I do a lot of gym work and like to keep fit and it affected the amount of exercise I could do. It was so painful at night that I had to get up and walk around and work became challenging as it involves a lot of travelling.” Hannah was referred to Mr Conroy at Spire Leeds Hospital, and an X-ray showed her hip had worn away to bone on bone.

Mr Conroy said, “Chronic hip pain can have a devastating effect on quality of life. Hannah had a condition called hip dysplasia that predisposes to early arthritis. In this group of younger patients potential complications need to be discussed fully as the demands on a hip replacement are far greater than in the elderly population. We now have more confidence about the wear rate of these new prosthetics which allows us to be less restrictive on an age basis as people are now keeping active longer than ever before.”

Hannah was treated with physiotherapy and two steroid injections before considering surgery. Her pain worsened and after discussing it with Mr Conroy she decided to go ahead with surgery in early February 2017.
Mr Conroy described the procedure, “Hannah had a minimally invasive hip replacement operation through an opening of just five centimetres minimising trauma to muscles through an innovative retractor system. She chose a spinal block as opposed to general anaesthetic that allowed her to be awake throughout surgery whilst being pain free. It helped her recover more quickly with minimal pain and she was able to mobilise putting full weight on the hip the same day as surgery.”

The fact that the scar was only 5cms long and is concealed within the bikini line was important to Hannah for cosmetic reasons. She researched carefully and specifically requested Mr Conroy use a certain piece of equipment which would leave her with a smaller scar.

Mr Conroy, who also has a degree in mechanical engineering, added, “The operation involved a unique retractor to protect the skin edges and allow a very small incision. The ball portion of the joint was removed and replaced with a short stem implant with a ceramic ball and modern polyethylene socket. Her implant was an uncemented stem with ceramic bearing surface. This type of implant is ideal for young patients with good bone quality and increased demands on lifestyle. The implant could potentially last for 20 to 25 years.”

Hannah said, “I’d never had any type of surgery before, not even major dental surgery so having an operation was quite a big thing for me. However, the nursing staff was superb. They helped me to relax and I listened to music through my ipod throughout the surgery and felt quite calm. I knew I was in good hands.”

Hannah is delighted with the results. “I had almost resigned myself to living with the pain. I would have had the surgery done sooner if I had known that was not the case. My parents and friends looked after me really well during my recovery but I’m now able to do things for myself.”