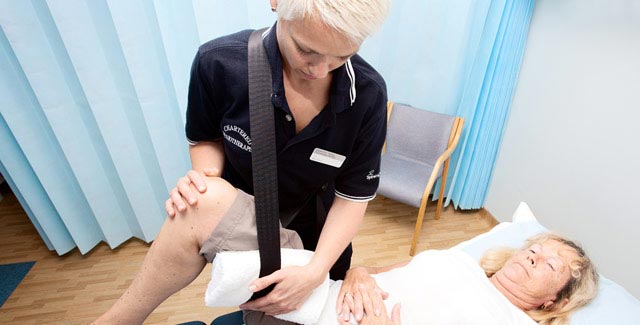 A bursa is a fluid filled sack which sits in between muscle attachments around a joint. There are lots of different bursa around joints in the body, with often more than one bursa being present in any one joint. Their role is to act as a shock absorber and lubricant, helping spread force or load through the joint and its supporting muscles as they work. The trochanteric bursa takes its name from the area in which is sits close to, the trochanter. This is the bony part on the outside of your hip.

The primary treatment is rest. This does not mean bed rest or immobilising the area but avoiding the actions which bring on, or reproduce, the pain. Icing the joint may help. A non-steroidal anti-inflammatory drug may relieve pain and reduce the inflammation. Should your condition not be improving, a steroid injection maybe recommended but this is usually after trying Physiotherapy and more conservative treatments.

Physiotherapy can help with both pain management and can aid recovery. Following identification of the cause of the problem your Physiotherapist will work with you to strengthen the hip muscles, core stabilisers and may stretch the iliotibial band, which if tight, will relieve tension around the hip and reduce the friction caused by the band ‘rubbing’ over the bursa.

The use of ultrasound has also been found to be helpful in treating the bursal pain, reducing inflammation and aiding tissue healing. Acupuncture around the hip joint is also effective in resolving many of the symptoms caused by this painful condition. Your Physiotherapist will be able to advise you on exercise strength, progression and your return to activity or sport should you require.

If the Physiotherapist feels a biomechanical problem maybe a contributing factor, we have an on-site Orthotists Clinic which will be able to undertake a more detailed biomechanical assessment and make custom made orthotics to improve your foot mechanics and gait.

Ilotibial Band Syndrome (ITBS) is one of the leading causes of knee pain in runners, typically experienced on the outside or ‘lateral’ aspect of the knee. However ITBS is not exclusive to runners and can be experienced by many people of a variety of ages, causing significant discomfort during walking or standing.

In cases where the band has shortened becoming tight, or the muscles around have weakened, this continual rolling of the band over the outside bone of your hip (lateral femoral condyle) combined with the repeated knee motion, during activities such as walking or running, may cause the ITB, or parts of the band to become inflamed and painful.

ITBS symptoms range from a stinging sensation just above the knee joint to swelling or thickening of the tissue at the point where the band moves over the femur. The pain may not occur immediately during activity, but may intensify over time, especially as the foot strikes the ground. Pain might persist after activity. Pain may also be present above and below the knee, where the ITB actually attaches to the tibia.

ITBS can result from one or more of the following biomechanical problems, muscular imbalances, or exercise training habits.

While ITBS pain can be acute, the iliotibial band can be Rested, Iced, Compressed and Elevated (RICE) to reduce pain and inflammation, followed by stretching, which your therapist can show you the correct techniques for. Using a foam roller to loosen the iliotibial band through deep tissue massage, can help prevent and treat ITBS (your therapist can discuss this with you).

Other treatment options include acupuncture of the ITB to help relax the tissue and improve blood supply; this is also beneficial if your problem is long standing (chronic) and you have developed ‘trigger points’, or painful knots in the ITB.

Taping has also been shown to help with ITBS through restoring control around the knee. Physiotherapists use a taping technique for the knee cap (patella taping) to improve the mechanics or use Kinesio taping of the ITB.

Other treatments available for this injury include a compression wrap to mobilise the ITB where the tendon meets the knee. This is called an 'IT band compression wrap.' These are all treatment options that your therapist may discuss with you to tailor the treatment to suit your needs.

Sporting hip and groin is an umbrella term used to describe injury to the hip/groin. It is commonly  associated with sports involving repetitive twisting, kicking and turning movements such as football, running, rugby, basketball and tennis.

People who are at risk of this condition usually present with muscle imbalance, core weakness, ligamentous injury or a history of previous hip/groin injury. Also a dramatic change in training techniques and intensity can increase an athlete’s chance of developing this condition. The variety of structures and potential causes of pain can make differential diagnosis a challenge for the clinician.

Due to the nature of this condition signs and symptoms can vary from person to person, depending on the structures that are affected. You should however consider seeing a Physiotherapist if you begin to get any of the following symptoms:

Physiotherapists are usually the first point of contact for patients suffering from this condition and the symptoms associated with it. Accurate diagnosis of hip and groin injuries, correct treatment and rehabilitation, and/or referral if necessary, avoids long periods of inappropriate treatment.

Physiotherapy treatment for this condition is based on an accurate diagnosis to whether conservative treatment is going to be beneficial or if further investigation is warranted.

A graded approach to your chosen sport/activity is preferred to prevent this condition. A regular review and check of your footwear is recommended especially if you are about to increase your intensity of mileage in training.

Good nutrition and hydration is needed to maintain supple and flexible joints.

Read more
What you'll lose is nothing compared to what you'l…