She is an award-winning garden designer with an impressive list of Royal Horticultural Society trophies to her name.

But as Karen Tatlow prepared to exhibit at the prestigious RSH Malvern Spring Festival she thought a shoulder injury that had been niggling her for the past year was going to put an end to her hopes of success.

Karen, who runs Karen Tatlow Garden Design from her studio in Cappers Lane, Lichfield, was suffering from ‘frozen shoulder’ and beginning to doubt she was up to the ‘three weeks hard labour’ she faced to put her exhibit together.

Now after winning an amazing three awards at the Malvern event - including the People’s Show Garden – Karen is full of praise for the Sutton Coldfield surgeon who got her back to winning ways.

“The pain in my shoulder had steadily gone from mild to almost unbearable and I had reached a point where I could hardly move my arm.

“Just ordinary housework was almost impossible so going through the physical exertions of putting a show garden together just didn’t seem possible – it looked like I might have to pull out,” she explained.

But it was then she met with Consultant Orthopaedic Surgeon Mr Paresh Sonsale at Spire Little Aston Hospital in Sutton Coldfield.

“He explained that surgery wasn’t always the best option when it came to a frozen shoulder but that targeted steroid injections could get my movement back.

“Once the shoulder was moving I could then follow a specifically-designed course of physiotherapy that would help further strengthen it until it was almost as good as new,” said Karen.

Mr Sonsale explained that frozen shoulder was caused by the inflammation and thickening of the capsule lining that surrounds the shoulder joint and that, in many cases, there was no obvious cause of the condition.

He said: “Surgery can be considered as a last resort but I didn’t think it would benefit Karen for us to go down that route just yet.

"Instead, I suggested high-strength steroid injections that would be given with pinpoint accuracy to ensure the best pain-relief outcome.

“Normally injections are made ‘in the region’ of the pain but, in cases like this, we are much more ‘area-specific’ – we are looking for a bullseye when it comes to accuracy!

“With these injections, we could surround the pain area and give the steroids the best possible chance of success. We also advised a general anaesthetic while we carried out the work.”

As for Karen, she said: “At one stage I thought I was going to have to abandon the whole project which had been a whole year in the making. Worse still I was doing it in support of Diabetes UK as my stepdaughter is Type 1 diabetic and I really didn’t want to let the charity down.

“I worked all day, every day, for five weeks in all kinds of weather and no-one – least of all me – could believe what I was able to do.”

But when the judges awarded her a Silver-Gilt medal (the second-highest award possible) along with the Best Construction Award (awarded to the garden constructed to the highest quality) and then the most coveted People’s Choice Show Garden - voted for by the public for their favourite garden, she knew it had all been worthwhile.

“I was speechless,” she said. “It had come so close to not happening at all then there I was receiving three awards at one of the country’s top shows. It was a lot of hard work but I really couldn’t have made it without the help of Mr Sonsale and the physio team at Spire Little Aston,” she said. 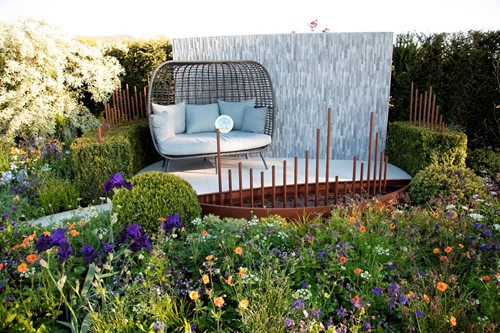 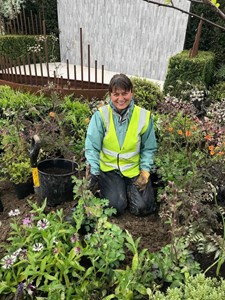