His friends and family just didn’t seem to notice - but Alex Trybus has worried about the shape of his ears for as long as he can remember.

The 20-year-old student from Abbots Langley, made sure he was ‘side-on’ whenever anyone picked up a camera to ensure his ‘sticky out ears’ were never caught on film!

Now Alex, an International Business student at the University of Northampton, is all smiles after having a new ‘24-carat’ ear-folding operation that has given him a whole new confidence in his appearance.

He explained: “I always felt they stuck out massively and they were often the only thing I’d notice when I saw myself on a photograph.

“The strange thing is I seemed to be the only one who noticed! It wasn’t a case of my friends making jokes or anything like that, it was more of a self-conscious thing – in fact I seemed to be the person making the jokes about them!”

Carried out at Spire Bushey Hospital by ENT (Ear, Nose and Throat) Consultant Mr Ravinder Natt, the procedure involves implant made of a short strip of titanium and nickel, about the thickness of a human hair, which is then plated with 24 carat gold to reduce the visibility under the skin.

A small incision is made at the edge of the ear before the implant is inserted and put into position. It then grips the ear the cartilage and folds it into a predetermined shape.

“The earfold allows a patient to select the shape they would like their ears to be before the operation even starts. Unlike cosmetic surgery there are no bandages and people can get on with normal living almost immediately afterwards.

“It is suitable for people wanting relatively major changes to the shape and angle of their ears but, as in Alex’s case, is also excellent for those who just want to ‘tweak’ their appearance a little.”

As for Alex, he said: “To be honest my friends didn’t notice the difference at first until I showed them some pictures of me before I had the surgery.

“But, to be honest I didn’t have it done for other people – I had it done for me. Whatever anyone else saw I saw sticky-out ears and I was always conscious of them. Now I’m as happy as everyone else to smile for the camera - even when my ears are in full view!” 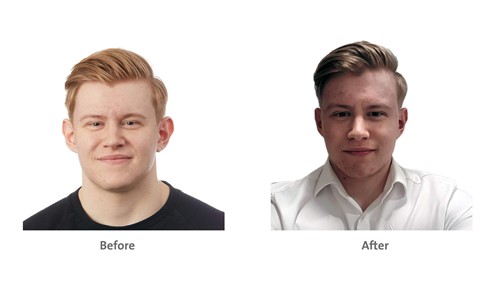