Dave Kyle, 49, a father of two and director of a Leeds construction firm, suffered debilitating pain in his right knee for 15 years. He couldn't walk without using crutches for the last few months, before having advanced tissue-engineered cell-based cartilage transplant surgery, under the care of Mr Ram Venkatesh. 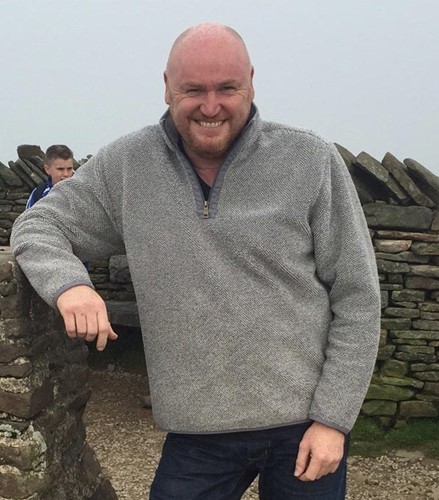 “It started 15 years ago. One day when I knelt down at work I felt a sharp pain in my knee, and that pain turned into an ache which stayed with me for years. Then nine years ago I took my children skiing and had a bad fall, which made it worse. I lived in a three-storey house and I found it almost impossible to climb the stairs. It got to the point where the pain was so severe I knew I couldn’t carry on.”

Dave heard about the latest developments in cell therapy being used for cartilage repair and was referred to Mr Ram Venkatesh, consultant orthopaedic surgeon at Spire Leeds Hospital and member of BASK (British Association for Surgery of the Knee).

Mr Venkatesh explained the different options of repairing cartilage, including autologous chondrocyte implantation, where a patient’s own tissue is removed and the harvested cartilage is genetically modified before being transplanted back into the injured joint. “I knew I was talking to the right guy after our first meeting. Mr Venkatesh explained the procedure and what I could realistically expect to achieve from it, and I was keen to have the surgery as soon as possible.”

Dave said, “I didn’t want a false knee replacement. The cartilage damage was extremely painful but the rest of my knee was normal. If it eventually needed a knee replacement it would not last long on a building site. I needed something natural that would last.”

He underwent the first of the two-stage knee cartilage transplant cell therapies in March 2013 and the second procedure eight weeks later. Cartilage was removed from his knee and sent to a culturing facility in Europe overseen by the Human Tissue Authority.

Mr Venkatesh described the procedure, “The first step of the operation involves a key hole arthroscopy procedure to obtain chondrocytes from the affected knee joint. The harvested cells are then transported to the culture facility for a few weeks and the cells are multiplied into many millions of cells through a special process. Then the second surgical procedure is performed to implant the cells beneath a collagen scaffold into the damaged areas of the knee joint.”
He said the first procedure takes about 20 minutes and the second procedure takes about an hour.

The procedure, which can also be used to treat other large joints such as the ankle, has been given approval by the European Medicines Agency as an Advanced Medicinal Therapy product (ATMP approval). Spire Leeds Hospital is the only hospital in Yorkshire with the Human Tissue license to perform this procedure.

Mr Venkatesh added, “One of the benefits of this procedure is that since the cartilage cells come from the patient themselves they are not likely to be rejected when they are transplanted back into the injured joint. It takes about a year for the implanted cells to develop to full strength. The procedure requires extensive rehabilitation and the Alter-G equipment at Spire Leeds Hospital can be useful in the rehabilitation process.”

In September this year, Dave completed a trek to the top of Pen-y-ghent, one of the Yorkshire Three Peaks. “It took three and a half hours to cover the seven mile walk. I used a walking stick for support, but I did it. I was over the moon.”

He now plans to climb the Three Peaks in one day. “I am so grateful to Mr Venkatesh. I can get on with my life now and make up for the lost years”.

"I had gastric bypass surgery, lost 7 stone and now I run marathons!
Read Karen's Story
"I cannot thank Dr Vani enough as he has genuinely changed my life.
Read Miss K O'Reilly's Story
"91 days after the operation I was back skiing
Read Ed Morgan's Story
Spire Healthcare - proud to support the NHS

Since March 2020, we have been proud to care for over 150,000 NHS patients, thanks to our landmark partnership with the…